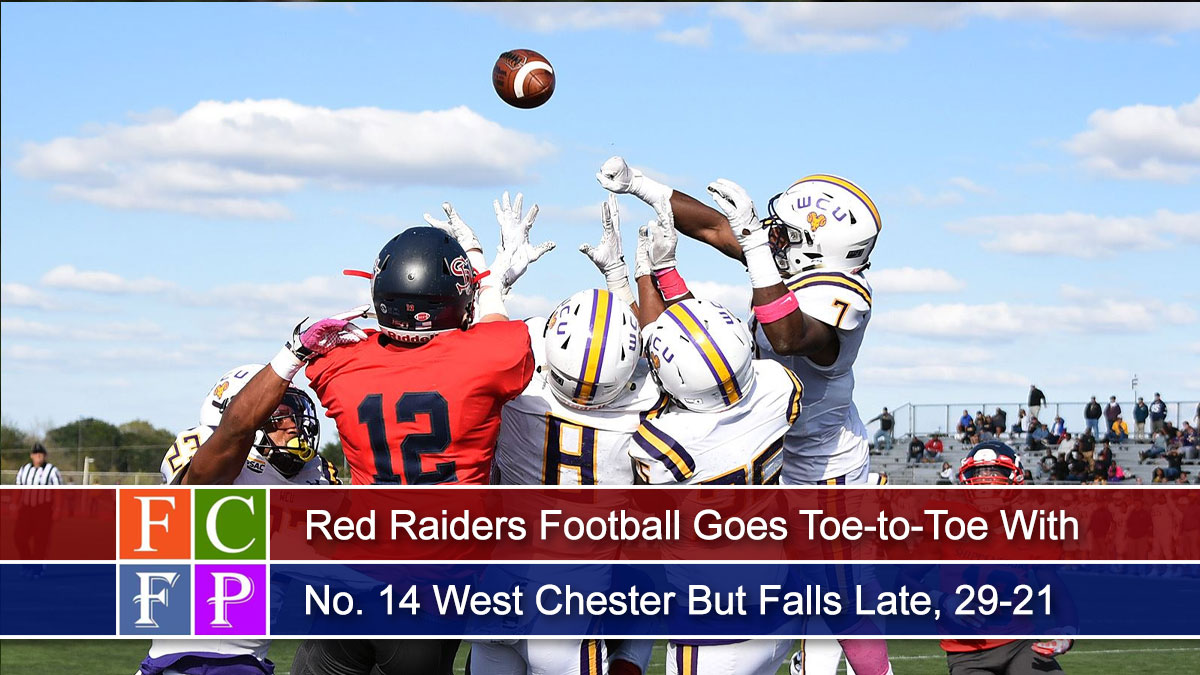 SHIPPENSBURG (Oct. 5, 2019) — Shippensburg University’s football team forced five turnovers and got three rushing touchdowns from graduate Luke Durkin on Saturday as it battled to the end against No. 14 West Chester, but the Red Raiders came up short in a 29-21 setback to the Golden Rams amidst perfect autumn weather from SU Student Association Field at Seth Grove Stadium.

The visitors scored at the 10:07 mark of the second quarter to take a 16-14 lead. Redshirt senior Tig Spinell.blocked the extra ointment kick. That lead would last for the next 20 minutes of game action.

With 5:03 left in the third quarter, Durkin reached the end zone for the third time to put the Red Raiders back on top, 21-16. West Chester immediately countered with a touchdown drive of its own to go back ahead 22-21. The Golden Rams failed on the subsequent two-point conversion attempt.

A celebration penalty on that WCU touchdown resulted in a penalty on the ensuing kickoff. SU started its next drive on the Golden Ram 49-yard line but turned it over on downs. The defenses of both teams were in optimal form all day and hit their respective zeniths in the fourth quarter, forcing punts on six consecutive possessions.

West Chester took advantage of the second sack to obtain a short field in the final three minutes. Needing just two plays to rush 35 yards into the end zone, the visitors made it 29-21 with 1:39 to go.

Shippensburg’s offense incurred a couple of key injuries in the fourth quarter, but got as far as the WCU 27-yard line for the game’s final play – a toss into the end zone that fell incomplete.

The Red Raider defense forced just one turnover through the first four games – the fewest in the PSAC – before coming away with five on Saturday. That’s the most turnovers forced by Shippensburg in a game since Week 2 of last season when the squad came away with five in a victory over Slippery Rock.

A whole host of Red Raiders delivered banner defensive performances, including linebackers Spinelli and redshirt-freshman Tyler Simon. Spinelli finished with a career-high 13 tackles (eight solo), a sack among his two tackles-for-loss (TFLs), and the aforementioned blocked extra-point. It is the seventh time in Spinelli’s career he has finished with 10 or more tackles in a game.

Simon had a hand in three of SU’s five turnovers — first recovering a fumble in the second quarter. On WCU’s next possession, Simon had a highlight-reel interception in which he leapt to bat a pass in the air, tipped the carom to himself as he was falling, and secured the interception while on the ground. Early in the third quarter, Simon forced a fumble that was recovered in Golden Ram territory by redshirt-senior Deionte Wilson. Simon finished with four tackles; he has had four or more tackles in each of his first five games.

Wilson, facing his former team for the second time, delivered a season-high nine tackles. He also had the aforementioned fumble recovery, and intercepted a pass on West Chester’s first drive of the third quarter. It was the fifth interception of Wilson’s career. Saturday also marked his ninth game with five or more tackles.

Redshirt-sophomore Trey Paul and redshirt-senior Eric Dzieniszewski also represented the secondary well. Paul had eight solo tackles, including one TFL; he finished one tackle short of a career high. Dzieniszewski had seven solo tackles and was credited with a pass breakup.

Offense Stats Good, but Not Enough

Both Durkin and redshirt-sophomore Brycen Mussina missed the majority of the fourth quarter due to injury. Mussina, who was able to come back for the final drive of the game, completed 16 passes for 154 yards. He has now thrown 65 consecutive pass attempts without an interception.

Redshirt-sophomore Sean Judge finished with 236 all-purpose yards. That was the most by a Red Raider since Cole Chiappialle (251) in the final 2016 game. That total includes 161 kickoff-return yards, the most in a single game by a Red Raider since Andrew Smith (209) on Sept. 27, 2014 at Bloomsburg. Included in Judge’s total was a 56-yard return in the first quarter and a 32-yard return to start the second half.

After being held without any yards of total offense last week, Judge also delivered 19 rushing yards and a team-high 61 receiving yards in Saturday’s game.

In 2017 and 2018 not a single Red Raider had 200 or more all purpose years in a game. This year the feat was achieved in two back-to-back weeks. Luke Durkin had 212 last week against Bloomsburg.

Sophomore punter David Shank had three punts inside the 20-yard line, his most in a single game in his career. He also averaged 33.2 yards per punt.

Next week, Shippensburg rekindles its long-time rivalry with Shepherd – marking the first time the two teams will play each other as conference opponents. The last meeting was the 2013 season opener, and also the last time that the Red Raiders were shutout (33-0). Kickoff is at noon from Ram Stadium.