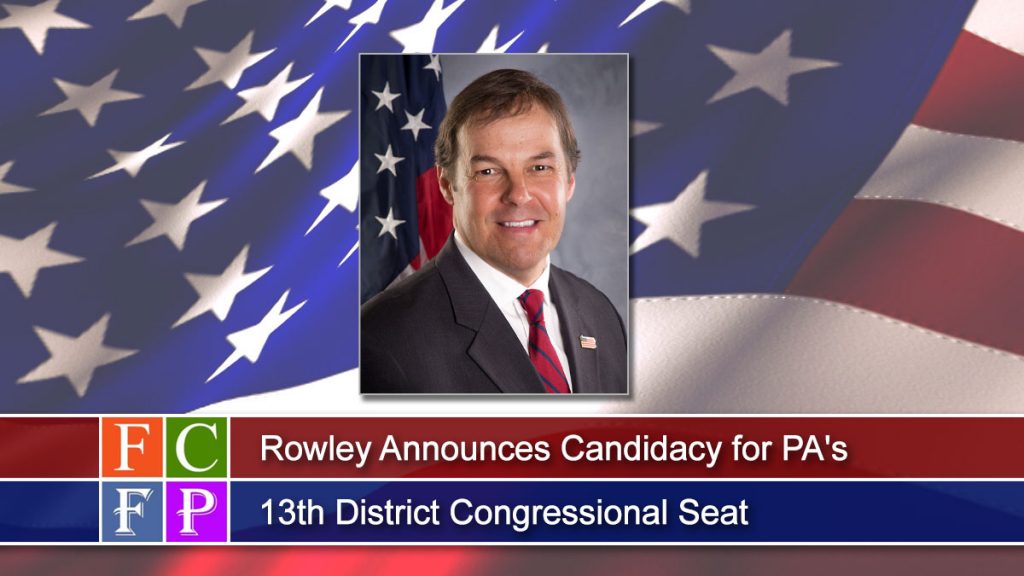 Rowley is a retired FBI Special Agent and former police officer and state trooper/flight paramedic. He most recently worked as a park ranger with the Commonwealth of Pennsylvania, Department of Conservation and Natural Resources (DCNR) and as a substitute teacher for school districts in Somerset and Westmoreland counties.

Rowley was born in Cumberland, MD. and raised by a single mother. He has a younger sister.

He attended Allegheny High School (1982) and holds a bachelor’s degree in political science from Washington College (1986), Chestertown, MD. Rowley has family ties to Meyersdale, Somerset County. In 2014, Rowley and his family moved from northern Virginia to Jones Mills, Donegal Township in the Laurel Highlands.

“America United – Our Future Together” is at the heart of Rowley’s campaign message of unity. (See his full message in his open letter to voters, published in today’s Letters to the Editor section).

In his campaign announcement, Rowley makes the following pledge:

Calling his campaign “truly a grassroots campaign,” he said he will rely on the support of men and women across PA-13, who he pledges to “fight for every day.”

The campaign will not be accepting contributions from corporate PACs or federal lobbyists, he said.

“(I) believe firmly in a government of the people, by the people and for the people, where elected representatives work for the citizenry, not the special interests, lobbyists and dark money poisoning Washington,” he said. “(I) will always put the interests of America and the citizens of PA-13 above any individual political leader or political party, or self-interest.”

Pennsylvania’s 13th Congressional District consists of all or parts of ten southwestern and central counties, including all of Adams, Bedford, Blair, Fulton, Franklin, Huntingdon, Somerset and portions of Cambria, Cumberland and Westmoreland counties.

Citizens interested in joining the campaign and/or making a contribution should contact the TODD ROWLEY FOR CONGRESS campaign can be contacted through the campaign website, www.toddrowleyforcongress.com or at toddrowleyPA13@gmailcom.