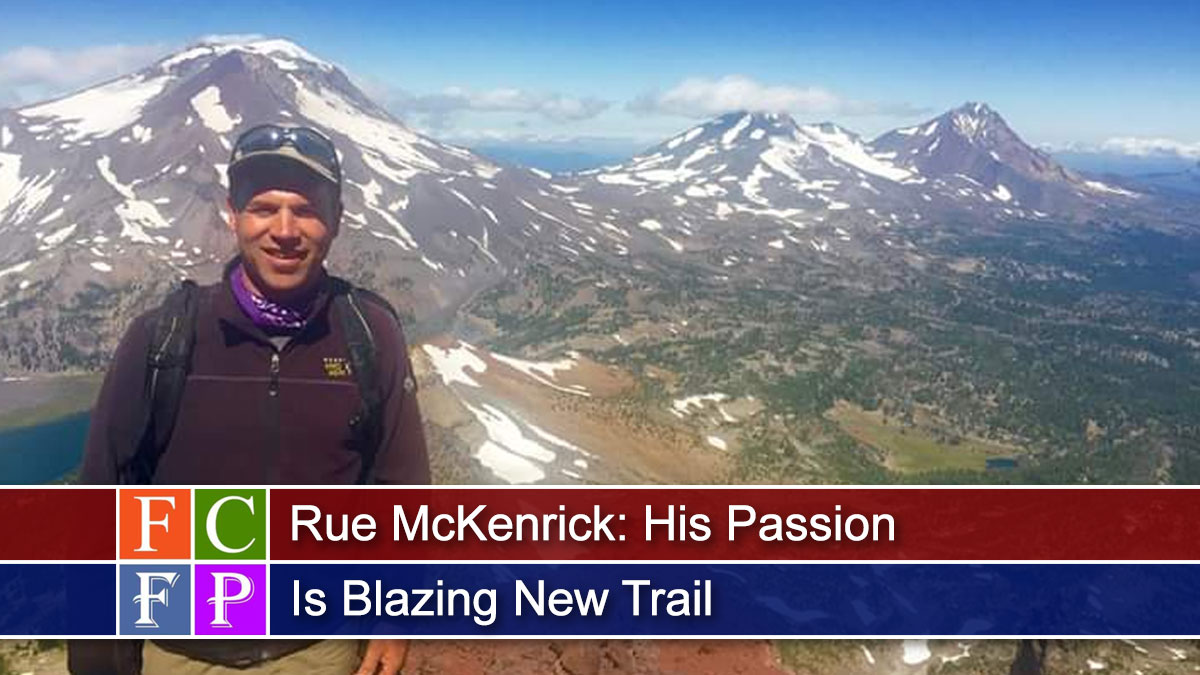 Hiking the circumference of the continental United States is kind of like a calling for Andrew “Rue” McKenrick.

The 1998 Chambersburg Area Senior High School graduate was already a seasoned hiker when he set out last summer to blaze a new hiking trail across America.

So far, he’s hiked over 2,000 miles of what he hopes will someday be known as the American Perimeter Trail.

Back when McKenrick was attending Chambersburg Area Senior High School, the idea was not at the forefront of his future planning.

Rue grew up in the Fayetteville-Caledonia area, not too far from the Appalachian Trail. Yet he didn’t hike that trail from beginning to end until he was 23.

But, being Appalachian born and bred, hiking and backpacking was pretty well in his blood at an early age. He traveled through Europe as a teenager and young adult. After spending a few summers overseas, he realized he had never traveled through his homeland.

Then, just like now, the next journey was obvious to him. He thru-hiked the Appalachian Trail and in the years that followed completed the Triple Crown of Backpacking, adding the Pacific Crest Trail, and Continental Divide Trail to his accomplishments.

In between those trails he was an Ameri-Corp Member, Outward Bound Employee, Thru-hiker of several other backpacking trails, an Appalachian Trail Ridge Runner, Environmental Educator, and Backcountry Guide.

Rue is currently creating, exploring, thru-hiking, and designating The American Perimeter Trail. This 12,000-mile route circumnavigates the continental United States. With almost 10,000 miles to go, he hopes a growing grassroots movement of support will see him through the rest of the trek.

It’s something he has given a lot of thought to but admits to not doing a tremendous amount of detailed planning. When he started last July, he had plenty of hiking experience. He had spent a couple of years in meditation and doing community service in Bend, Oregon, the small mountain town where he and his partner relocated to a number of years earlier.

Rue had already taken on major challenges with the Appalachian, Continental Divide and Pacific Crest trails. It was time, he decided, for the biggest challenge of his life — a trail that didn’t exist yet, one with no beginning or end. He would call it the American Perimeter Trail.

It’s also a work in progress, and one he is doing on a shoestring budget. Support comes from donors who are following his progress on his webpage, Back to the Pack, and on social media.

He has sponsors for his gear and he’s grateful to them for supplying those needs. Donors help supply other needs, including food and supplies on the trail.

The adventure began July 15, when he strapped on his backpack and left Bend. He hiked down the west coast, cutting across Death Valley and crossing the southwestern states of Arizona and New Mexico.

He is now in Texas, a real challenge since he is hiking only on public lands, something scarce in that state. But he is adaptable, and he is finding those patches of public land.

While his gear is taken care of by sponsors, the rest of the trip and his needs on the trail are “very much a community project.”

By involving the larger community in funding, the trail becomes more than just Rue’s project. It belongs to the community.

The entire 12,000 miles will take well over a year to complete. Once he gets across the southern Gulf states, he will pick up the Appalachian Trail and head north. He expects to be in Pennsylvania this summer, perhaps as early as June.

Rue calls his latest adventure “The next step to a journey of personal growth and service to my community. This trail is without limits and has no guide book. Since it is a loop it has no beginning and no end. It is truly infinite.”
​

Vicky Taylor - June 23, 2020 0
There’s will be no fireworks in Chambersburg on July 4th. Both Gettysburg and Shippensburg will go ahead with plans for the traditional Independence celebration.

Music review: This ‘blue’ is complex

Staff Report - July 6, 2020 0
She was a longtime member of the Grandpoint Church in Chambersburg. She enjoyed sewing, camping and loved cats.

January 30, 2019
Thanks for subscribing! Please check your email for further instructions.