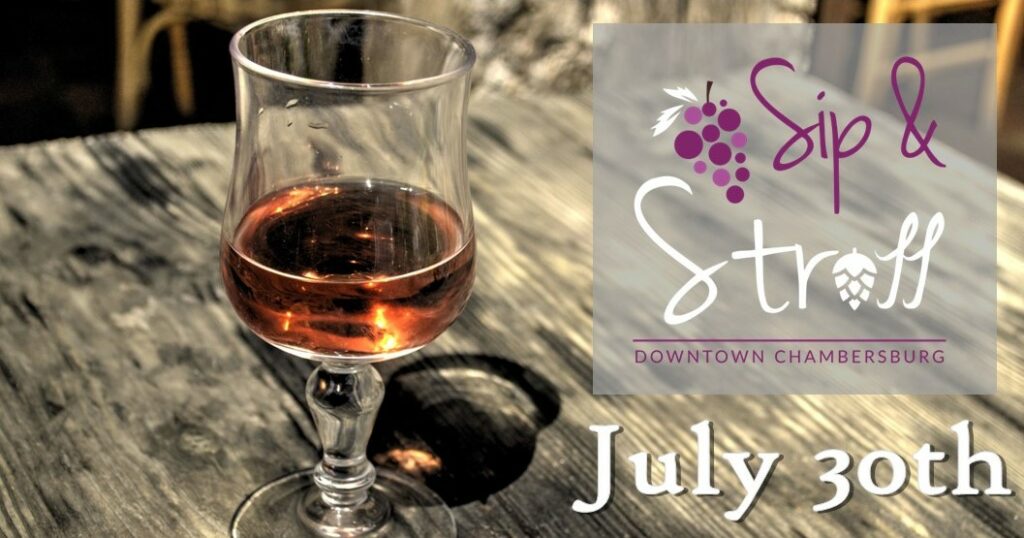 From 12:30 to 4:30 p.m. that day, ticket holders ages 21 and older can wander through the downtown area and step inside various establishments to try offerings from liquid providers such as Roy-Pitz Brewing Co. and ANXO Cider, both of Chambersburg, and Juniata Brewing Co. of Huntingdon, Pa. Those who pay the $30 fee ($5 for designated drivers), will have the chance to try two samples of about 3 ounces each at every site during one of three, three-hour windows of time starting at 12:30, 1 and 1:30 p.m.​ All proceeds support DCI’s revitalization efforts.

“I think this has been a fabulous addition to the offerings that DCI has,” said Stacy Mellott, team lead for The Stacy Mellott Group with RE/MAX1st Advantage, the presenting sponsor for the Sip & Stroll events since 2021. “It’s been a great attribute.”

Mellott said it’s vital for area organizations to support downtown events, something she understands well from her time as executive director of Chambersburg Council for the Arts.

Sip & Stroll not only draws breweries and wineries from the outskirts of Chambersburg, but attendees, who are pleasantly surprised by the myriad offerings downtown.

“It pulls them from just the facade into the business,” said Mellott, who joined the DCI board in January. “We’re a small little town with a big bang.”

That small town will offer a big dose of drinkable flavors on July 30.

Among them will be sugar-free ciders from ANXO Cidery, which started leasing space in April 2021 at 521 Black Ave. in Chambersburg and has been licensed as a winery since then.

“This will be our first time participating in any event in Chambersburg and we’re very excited to meet our neighbors,” said Sam Fitz, co-founder and president of ANXO, which is pronounced Ahn-Cho. “We hired a very skilled cidermaker, Ian Radogost-Givens, who is our first full-time Pennsylvania employee. He’ll be there saying ‘hi’ to the town.”

Fitz said his company ferments apples from Pennsylvania, Maryland and Virginia into nearly two dozen ciders a year. He expects that the ones being poured at the DCI event in July will be made from apples grown in the Keystone State.

Returning to Sip & Stroll will be Roy-Pitz Brewing Co., this time with tastes for summer. Ryan “Roy” Richards, co-owner with Jesse “Pitz” Rotz, said their Lovitz Watermelon Lager and Everbearing Raspberry Honey Wheat Ale will be available for sampling.

“We chose these beers because they are the summer seasonals and pair excellent with summertime barbecues,” Richards said. “We hand slice and puree the watermelon ourselves, and both styles are very different and unique.”

Richards hopes to wow people who are not familiar with Roy-Pitz brews and surprise those who know them.

“The raspberry beer has never been released before and the watermelon is a summertime favorite. So, something new and something tried and true should be perfect for our local customer base,” he said.

Sam Thrush, president of Downtown Chambersburg Inc., said Sip & Stroll has a casual vibe, no matter what the season. He hopes to add more cideries to the mix of 10 to 12 vendors he anticipates will participate in the summer occasion.

For details about Sip & Stroll or to order tickets, go to facebook.com/DowntownCburg/events or email dci@chambersburg.org.