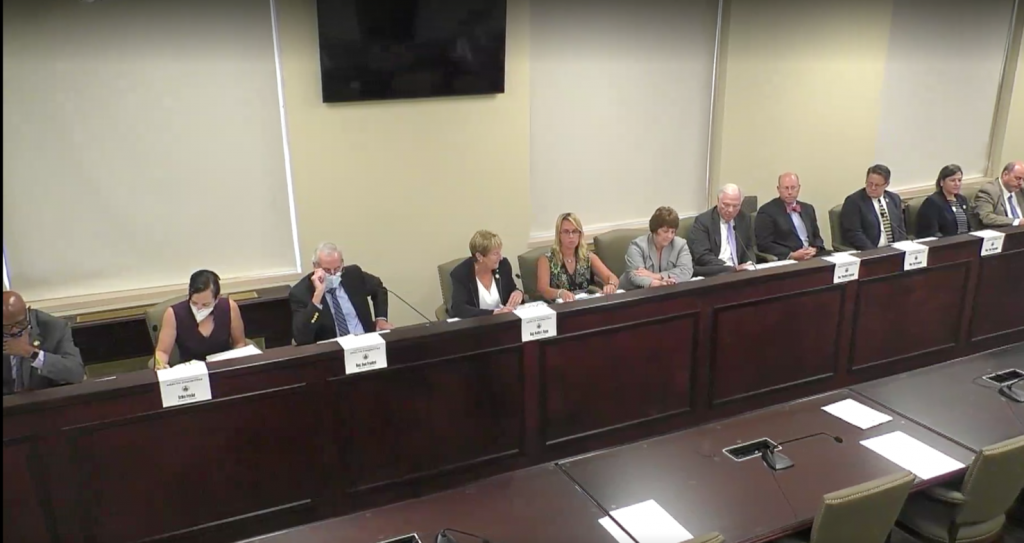 The debate about a school masking mandate rages on in Harrisburg.

Ordering masks in classrooms can only be done through regulation, not exploitation of a decades-old law intended for quarantining the sick, Republicans say.

The panel voted along partly lines to send a letter to the Joint Committee on Documents insisting the Aug. 31 order go through a regulatory review process that could, critics argue, take years to complete.

“We are not under a declared emergency,” said Republican Chairwoman Kathy Rapp, R-Warren.

Rapp said Beam lacks authority to issue the masking order, or enforce it.

Democrats lambasted Rapp and other Republicans on the panel, accusing them of dismissing schoolchildren’s safety. They pointed out that rising Delta variant COVID-19 cases create greater risk to unmasked students.

“There is no such thing as in-person learning without mitigation policies,” said Democratic Chairman Dan Frankel, D-Pittsburgh. “We either allow outbreaks that force school closures … or we act responsibly by continuing science-based policies that protect our children in the classroom.”

Beam signed the order citing authority granted to her by a clause found in the state’s Disease Prevention and Control Law of 1955. Republicans and a group of parents – led by Senate President Pro Tempore Jake Corman, R-Bellefonte – challenged the administration’s use of the statute in a lawsuit filed in Commonwealth Court last week.

Dispute over right to issue orders

Rapp reiterated Tuesday that she believes Beam can’t use the power without a declared emergency.

“This is being interpreted by our school districts and others that this is a law that they have to follow,” she said. “As a matter of fact, this is not a regulation. It is an order that we do not believe the secretary has the authority to make without declaring an emergency.”

The masking order took effect Sept. 7, after Beam said COVID-19 cases among school children skyrocketed 300% between mid-July and the end of August. The policy also includes child care centers, where cases have likewise risen in recent weeks. Children younger than 2 remain exempt from the order, per federal guidelines.

Children younger than 12 remain ineligible for the vaccine, while 67% of adults are fully immunized, according to the department. Pennsylvania also ranks fifth in the nation for total doses administered. Vaccination rates for children between the ages of 12-14 and 15-19 were 18.2% and 38.3%, respectively, as of Aug. 31.

A department news release published Monday reported that COVID-19 cases among children aged 5 through 18 stood at more than 5,300 for the week ending Sept. 8, as compared to just 574 cases during the same week in September 2020.

That’s why, Frankel said, using the regulatory process to address “the fast moving threat of a highly contagious virus” is little more than “political theater” on the part of Republicans.

“Diseases don’t pause while we go through a lengthy regulatory review process to deal with them,” he said Tuesday.

Rapp and other Republicans on the committee shrugged off the criticism as “expected.”

Meanwhile, Senate Republicans initiated their own response to the school masking mandate . They introduced a constitutional amendment that would limit Beam’s authority. It is similar to the policy approved by voters in May that curtailed the governor’s own emergency powers.

The proposed amendment would prevent the governor’s cabinet officials from using extraordinary powers outside of an active disaster declaration.

“The COVID-19 emergency declaration is over,” said Sen. Scott Martin, R-Strasburg. “The Governor is choosing to not issue another, and bypass the checks and balances of the General Assembly – the very checks and balances with which the citizens of Pennsylvania just voted to ensure by amending our Constitution.”

He sponsored the amendment along with Sens. Judy Ward, R-Hollidaysburg, and Kristin Phillips-Hill, R-Jacobus, on Tuesday. It must pass in two consecutive legislative sessions before appearing as a ballot question before voters in May 2023, at the earliest.

“If an unelected bureaucrat can take these types of actions (school masking order) without an emergency declaration being in place, this opens the door to the authority to close down businesses, quarantining healthy individuals or any other actions they want to take, with no time limits and no accountability,” Martin said Tuesday.