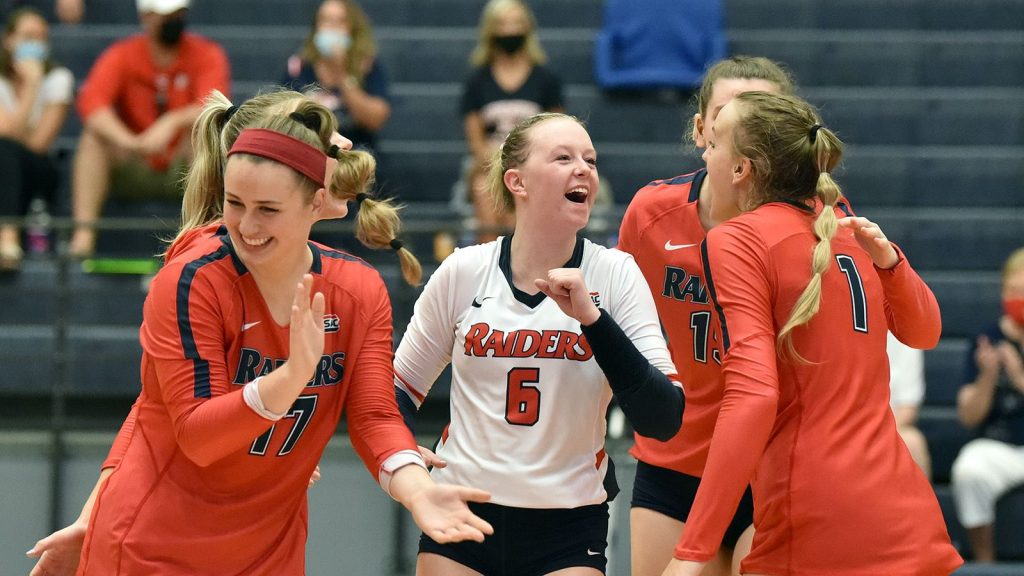 The Shippensburg University volleyball team split a pair of non-conference matches on Saturday inside a warm Heiges Field House, defeating Queens (N.Y.) in four sets before falling to Jefferson in five exciting sets.

Shippensburg received balanced offensive production against Queens (1-6), who was playing their second match of the day after opening against Bentley (SU’s Friday night opponent). The Raiders limited the Knights to a negative team hitting percentage, but the two teams combined for 51 attack errors and 15 service errors.

The Raiders put forth some big runs in their winning sets. In the first set, a long service run from freshman Lily Letchworth (Blue Springs, Mo./Blue Springs) transformed a 9-9 score to a 19-9 lead.

Junior Rachel Verhoef (Greencastle, Pa./Greencastle-Antrim) led the Raiders with nine kills and hit an impressive .571, swinging just one error on 14 attempts. Verhoef also had a hand in six blocks.

Shippensburg (4-7) proved to be a stiff test to Jefferson (10-0), an undefeated team that had already posted three victories over PSAC Eastern Division schools entering Saturday (two against Millersville, one against West Chester).

The Raiders staked out a 2-1 lead after a convincing third set in which the team hit .346 and held the Rams to a .034 percentage. Jefferson committed just six attack errors over the final two frames, however, in claiming each of the final sets to remain undefeated.

Leavy-Gaskins led the Raiders with 12 kills, swinging .171, while Verhoef hit .259, crunched 11 kills and had two solo blocks. Letchworth snuck in five kills and had 39 assists.

Leitner added three more aces and a team-high 27 digs. Gardner had eight kills and hit .143; Clabaugh had seven kills, and Agbale had six kills and hit .278.

Shippensburg returns to action at 7 p.m. Tuesday at Chestnut Hill.