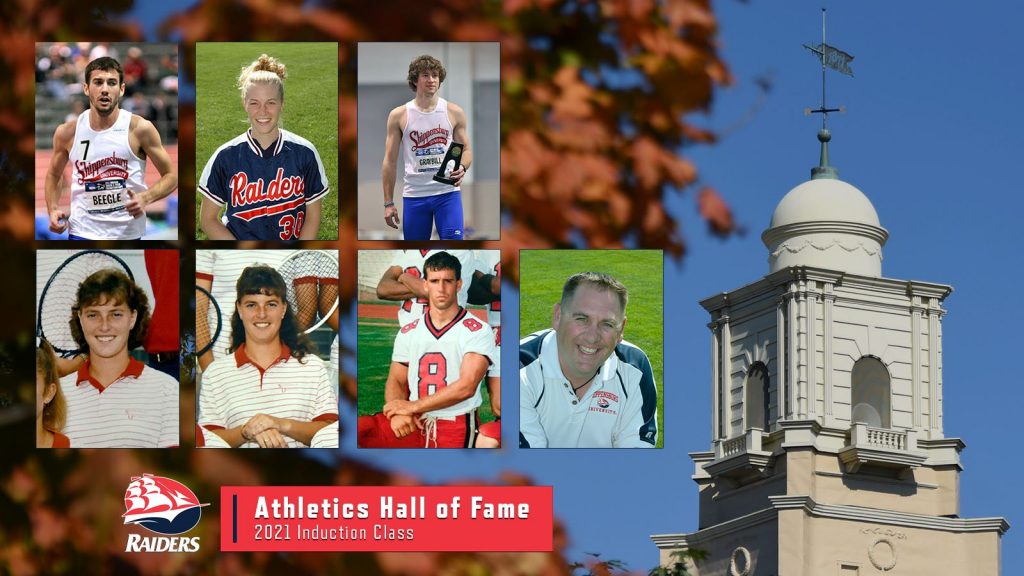 Six former athletes and one coach were inducted into Shippensburg University’s Athletic Hall of Fame during a ceremony Friday.

The 36th annual induction ceremony took place at Oct. 22 at the Tuscarora Room located inside Reisner Dining Hall. The event included a luncheon. Each was given an opportunity to provide a short speech.

The university also invited back to campus inductees from the 2020 class; they were also given an opportunity to provide brief remarks.

The six athletes and coach included:

Bryan Beegle ’11/’13M (Gettysburg, Pa./Gettysburg Area) is a national champion and an All-American distance runner. He was the first men’s track & field athlete in school history to become both a multiple All-American and multiple Academic All-American. Beegle was one of 10 NCAA Postgraduate Scholarship award winners in school history. He was a 16-time PSAC place-winner, and an 11-time All-PSAC finisher. He was a six-time PSAC Champion in track & field who also set the all-time PSAC indoor record in the mile and the distance medley relay.

Brenna Eck Hill ’04 (Cogan Station, Pa./Williamsport) was an All-American softball player for Shippensburg from 2001-04. She played catcher and designated player and graduated with the second-most RBIs in school history (126). A career .313 hitter, Hill totaled 189 hits and was a three-time All-PSAC Performer and a two-time NFCA All-Region performer. She started 206 of the team’s 207 games in a four-year run. During that time the Raiders went 147-60 and won back-to-back PSAC and NCAA Mid-Atlantic Region Championships.

Donald ‘Donny’ Graybill ’11 (Ephrata, Pa./Cocalico) is the only Raider to ever earn All-America honors in an indoor or outdoor multis competition. He placed fifth in the heptathlon at the 2010 NCAA Division II Indoor Championships; and he is a two-time PSAC Indoor Field Athlete of the Year, winning the award as a junior and senior. He still holds the all-time PSAC indoor record for the heptathlon (5,092 points). Graybill completed his career as a 16-time PSAC place-winner and a four-time PSAC Champion.

Jill Motter Stoner ’93/’97M (Bendersville, Pa./Biglerville) is an All-PSAC performer in women’s tennis who ranks second all-time in career match victories. She won 132 times spanning singles and doubles from 1989-93. Stoner is tied for the school record for doubles victories in single season (19 wins); an achievement she set as a freshman with Marci Staherski. She competed as a doubles pairing with her twin sister Joy in three consecutive NCAA Division II National Championships from 1991-93; and won three PSAC individual titles.

Joy Motter Weikert ’93/’97M (Bendersville, Pa./Biglerville) has won more career tennis matches than any other player in school history. She triumphed 136 times spanning singles and doubles from 1989-93. A GTE Academic All-American and a three-time PSAC Champion, Weikert set the school record for the most single-season dual meet singles victories as a freshman; winning 16 times in 1989-90. She was named the 1993 PSAC Women’s Tennis Athlete of the Year; and she competed as a doubles pairing with her twin sister Jill in three consecutive NCAA Division II National Championships from 1991-93.

Doug Seidenstricker ’94 (Hanover, Pa./South Western) capped off a tremendous SU Football career as a senior in 1994 with Associated Press (AP) Little All-America First Team honors, making him at the time one of three football All-Americans in school history. A two-time All-PSAC safety, Seidenstricker graduated as one of the Top 10 tacklers in school history. He had 352 tackles recorded from 1991-94. He is also the only known player to lead the football team in both interceptions and sacks in the same season.

Doug Knol (honorary) is in his 29th season as an assistant coach with the SU track & field teams in 2021-22. Knol is the most decorated and successful assistant coach in the history of PSAC Track & Field. He contributed to 51 PSAC Championships with the Raiders. A five-time USTFCCCA Atlantic Region Assistant Coach of the Year, Knol has mentored 29 NCAA Division II All-Americans. His athletes have broken six all-time PSAC records. Knol coached every single sprints & hurdles school record holder spanning both genders.