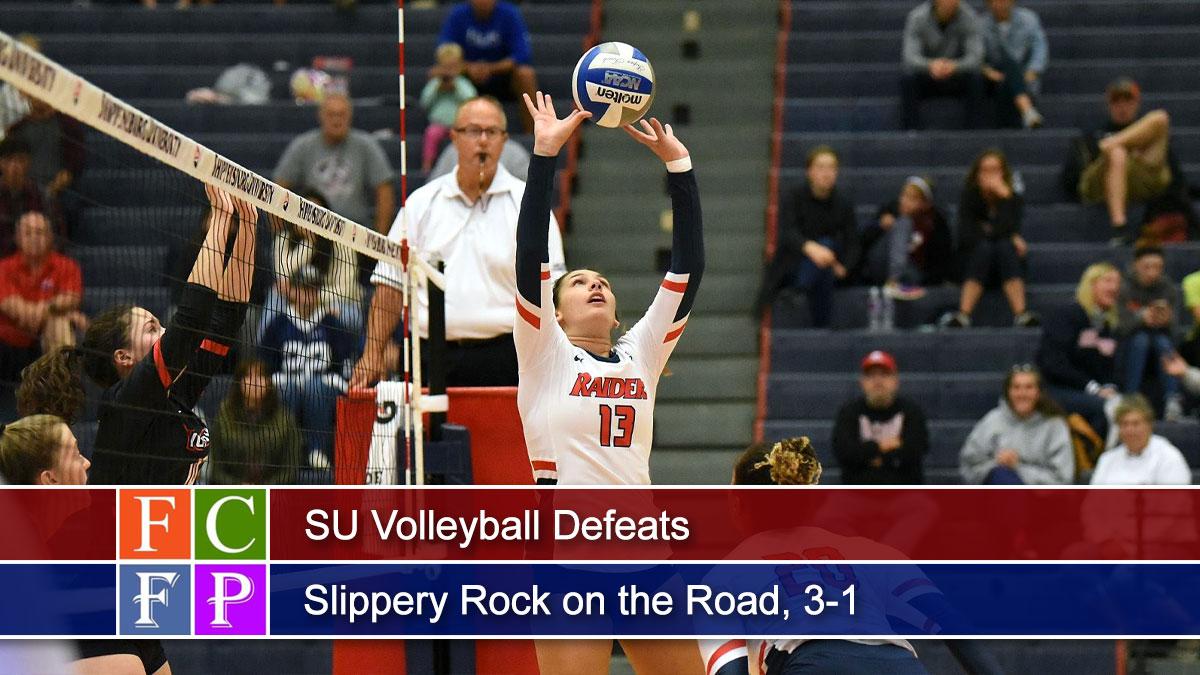 Shippensburg (13-3, 5-0) struggled offensively against Slippery Rock (7-10, 2-3), committing a season-high 32 attack errors and hitting just .121 against The Rock. The Raiders managed a .241 hitting efficiency in the fourth set and a .217 efficiency in the second set. They served seven aces on the night.

Senior Gabriella Johnson delivered her 10th double-double of the season and the 34th of her career. That equaled a career high with 19 kills to complement 16 digs and a .167 attack percentage.

Junior Gianna Sigado contributed her third double-double, crunching a career-high 14 kills to go along with 15 digs and a .178 attack percentage.

Junior Emily Hangen finished with 49 assists and eight digs. Her first assist of the night put her over 3,000 assists for her career; Hangen ranks fifth all-time at Shippensburg for the statistic.

Senior Samantha Webber and junior Alana Pergine each finished with four kills. Sophomore Keri Gearhart had a kill on each of her three attempts.

SU overcame a 10-2 deficit in the first set to establish a 14-12 lead. The Raiders led 23-19 in the first set before Slippery Rock scored four straight to tie it, but kills from Sigado and Gabriella Johnson closed out the opening frame.

In the second set, the score was again 23-23 before Kendall Johnson slammed a kill. She then combined with Gabriella Johnson for a block to stake the Raiders to a 2-0 lead.

Shippensburg staved off eight straight set points in the third set, overcoming a 24-18 deficit to make it 25-24 in its favor with a chance to serve for the match. The Rock rallied with a pair of kills, ultimately claiming the third due to the Raiders being out of rotation.

The fourth and final set featured SU leads of 8-4 and 14-8 before the team scored seven of the final 10 points to emerge victorious.

Friday’s match began a two-week crossover against the Northwest Division. Shippensburg remains on the road Saturday, facing Clarion at 1 p.m.