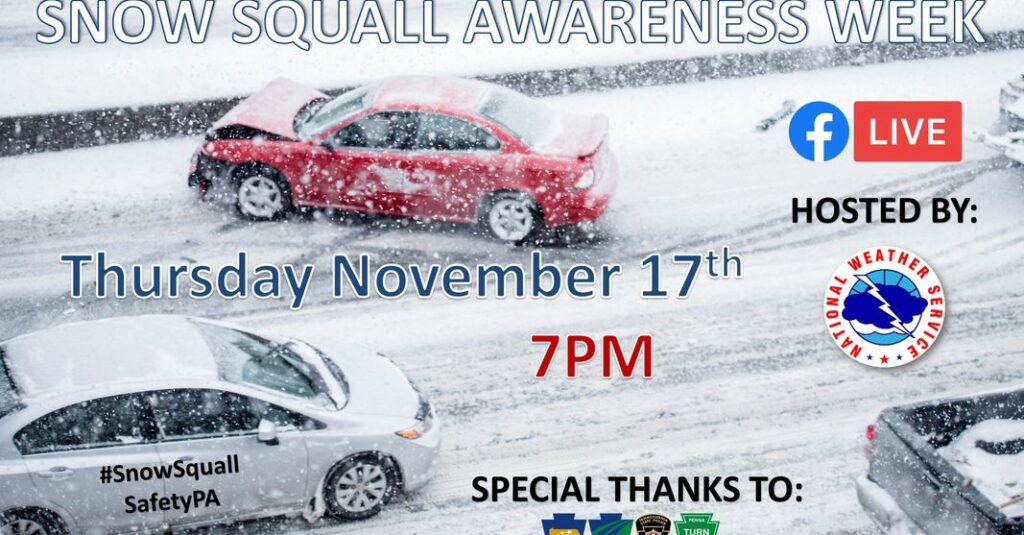 The theme for Snow Squall Awareness Week is simple: There is no safe place on a highway during a snow squall. Watch this video to see why.

The National Weather Service (NWS), is reminding drivers of the threat that snow squalls can pose during the winter months and advises area residents to observe warnings related to these dangerous weather hazards during Snow Squall Awareness Week, November 14 – 18.

“We all have a role to play in staying safe on roadways this winter,” said PEMA Director Randy Padfield. “When you get a snow squall warning, the safest thing to do is pause your travel to keep yourself and your loved ones safe, which will help first responders too.”

According to the National Weather Service (NWS), a snow squall is a brief but intense period of heavy snow (up to 2 inches in 30 minutes), strong winds (30+ mph), and whiteout conditions (visibility less than ¼ mile).

“One of the things that makes snow squalls so dangerous is their tendency to produce icy roadways, or what we call a flash freeze,” said NWS Meteorologist John Banghoff. “Because they come on so suddenly, snow squalls can catch drivers off guard; and lead to major transportation incidents, including deadly multi-vehicle accidents.”

“The National Weather Service issues Snow Squall Warnings to alert for the sudden onset of life-threatening conditions encountered by highway travelers during snow squalls,” said NWS State College Warning Coordination Meteorologist Jonathan Guseman. “If you are driving on an interstate when a Snow Squall Warning is issued, the best thing to do is gradually reduce your speed and exit the roadway at the next opportunity.”

“PennDOT is prepared for the season and actively monitors conditions and forecasts, but we cannot prevent snow squalls or know exactly where they’ll hit,” PennDOT Acting Deputy Secretary for Highway Administration Mike Keiser said. “If you must travel in inclement weather, please allow plenty of space around other vehicles and our snow-plow operators so they can perform their jobs effectively and safely.”

Caught in a sudden snow squall?

“Don’t slam on your brakes, stay in your lane and slow down to leave plenty of distance between you and the vehicle in front of you,” he said. “Turn on your head lights and hazard lights so others can see you. If you are on the PA Turnpike, dial *11 on your cell phone if you are in need of assistance.”

“Snow squalls have led to major pileup crashes with multiple injuries and deaths,” said Major Robert Krol, Director of the Pennsylvania State Police Bureau of Patrol. “If you are involved in a pileup crash, do not stand outside your vehicle if it is on or near the roadway. Instead, seek a safe place well off the roadway behind a guide rail, a concrete barrier or a large tree and if there is no safe place, stay in your vehicle with your seatbelt fastened.”

What is a Variable Speed Limit?

To help address traffic safety, Keiser explained that as part of a signage pilot project, the department will deploy variable speed limit, or VSL, signs – which quickly reduce speed limits when visibility or roadway conditions call for lower speeds – at 63 total locations:

While the VSLs are in place through April, permanent speed limit signs will be covered, and the normal posted speed limit will be displayed on the VSL unless visibility or winter weather conditions call for slower speeds. When speed limits are reduced, a yellow light at the top and bottom of the VSL will be flashing to ensure motorists are aware of the change.

Earlier this year, the program was active in 12 locations along I-80 in Clearfield County. Preliminary results show this low-cost innovative solution effectively slowed traffic when needed and reduced or eliminated crashes. Officials chose locations based on crash and weather data, such as frequent wintry conditions and where crashes caused by whiteout conditions led to roadway closures of more than three hours.

While PennDOT recommends not traveling during winter storms, motorists can check conditions on more than 40,000 roadway miles, including color-coded winter conditions on 2,900 miles, by visiting www.511PA.com. 511PA, which is free and available 24 hours a day, provides traffic delay warnings, weather forecasts, traffic speed information and access to more than 1,000 traffic cameras.

511PA is also available through a smartphone application for iPhone and Android devices, by calling 5-1-1, or by following regional Twitter alerts accessible on the 511PA website.

More information about how to prepare for any type of emergency, including free downloadable checklists of items to keep in your home, car, and at work, and specific information for people with access and functional needs or pets, is available on the Ready PA webpage.