Ship U: Softball Players Named to the All-PSAC East Team      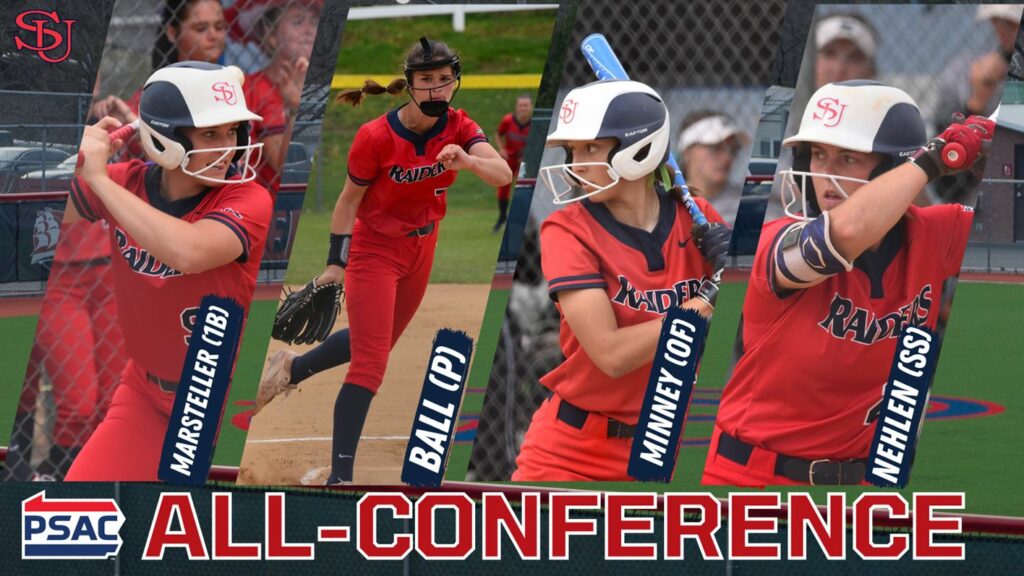 The Shippensburg University softball team had four of its players named to the 2022 All-Pennsylvania State Athletic Conference (PSAC) Eastern Division Teams on Wednesday, highlighted by major awards for two individuals – junior first basewoman Hannah Marsteller was named the East Athlete of the Year, and outfielder Katelyn Minney was named East Freshman of the Year.

It is the second time that Marsteller has been named the PSAC Athlete of the Year; she was also honored as a sophomore in 2021. She is the first Raider in school history to earn multiple Athlete of the Year awards, having accomplished the feat in back-to-back years. She is also the first PSAC player to win back-to-back PSAC East Athlete of the Year awards in 20 years, since Bloomsburg’s Erica Miller won the award four straight seasons from 1998-2001. Marsteller is just the seventh player in PSAC history to hit .500 or better in a season and the only player in history to ever do it twice. Entering the NCAA tournament, Marsteller has a .513 batting average with 12 doubles, two triples, 17 home runs, 56 RBIs and 16 stolen bases. She leads the PSAC in batting average, home runs, RBIs, hits (80), on-base percentage (.575) and slugging percentage (.942).

Nationally, among qualified hitters, Marsteller leads the nation in batting average, ranks second in on-base percentage, fourth in slugging percentage and is tied for eighth in home runs. She began the season on a 27-game hitting streak, which resulted in a PSAC record 37-game hit streak when including the final 10 games of 2021.

Marsteller was also recognized on the Schutt Sports/NFCA DII Player & Pitcher of the Year watch list for the second consecutive year. She was named the PSAC Eastern Division Athlete of the Week three times this season.  Marsteller was the only Shippensburg player selected to the All-PSAC First Team, while three were selected to the All-PSAC Second Team – resulting in the most All-PSAC honorees for the Raiders since 2018. Minney was joined on the Second Team by sophomore shortstop Alyssa Nehlen and freshman pitcher Alicia Ball. Marsteller earns her second consecutive First Team honor, and the second overall in her career. Minney, Nehlen and Ball achieved their first career All-PSAC honor.

Minney’s honor marks the first time that a Raider has been named the PSAC Freshman of the Year since 2018 (Courtney Coy). Entering the NCAA tournament, Minney has a .372 batting average with eight doubles, two triples, three home runs and 32 RBIs. In the PSAC she is ranked second in walks (28), tied for second in stolen bases (28) and seventh in on-base percentage (.488). She has a slugging percentage of .535. During the season, she had a streak of 17 consecutive games reaching base.

Ball was named the PSAC Eastern Division Pitcher of the Week in back-to-back weeks during the regular season. She enters the NCAA tournament posting a 1.67 ERA, fifth in the PSAC. Ball, who went 12-7, struck out 114 batters, seventh in the PSAC, and allowed opponents to hit just .205 against her, which ranks fourth in the PSAC. She had 11 complete games, including two shutouts, and one save. She pitched 117.2 innings, eighth-most in the PSAC.

Nehlen has a .298 batting average with three doubles, one triple and 23 RBIs. She is ranked fourth in the PSAC for hit by pitch (nine) while drawing 15 walks. Nehlen also has a .400 on-base percentage.

it is the fifth PSAC Eastern Division Athlete of the Year award in history for the Raiders and the first since SU had four different athletes win the award from 2003-06 (Heather Chantiles, 2006; Jaime-Lyn Dacey, 2005; Kelley Tiesi, 2004; Liz Corr, 2003).