Ship U: Softball Team Won One and Lost One in Elimination Game 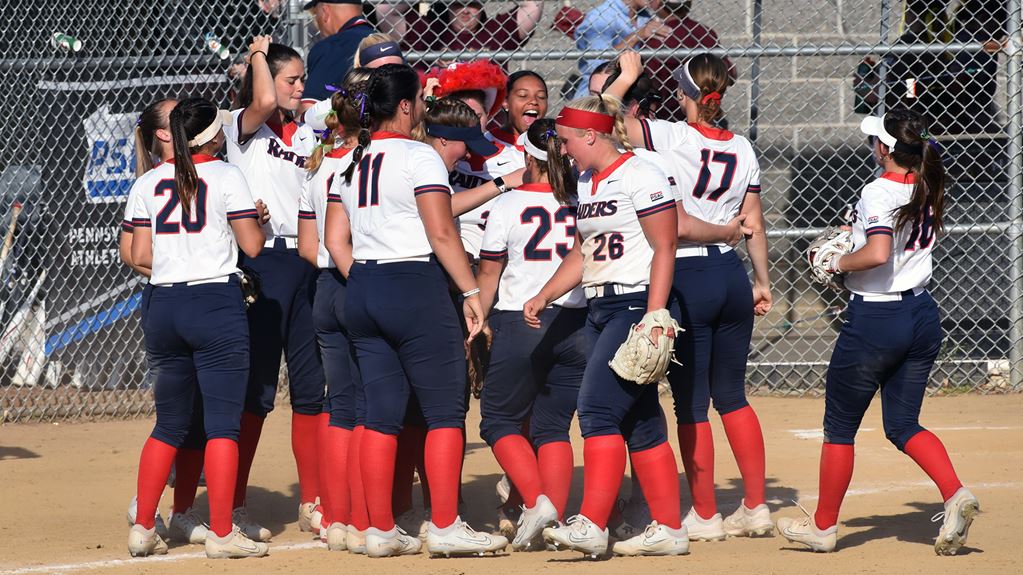 At Veterans Park SU rallied from 6-3 down in its final at-bat to take a 7-6 lead entering the bottom of the seventh, but the Raiders fell to the Huskies on a heartbreaking walk-off walk, 8-7 losing in their second game. The fared well in the first game and won an elimination game on Thursday over Gannon. The score was 6-5 in eight innings.

Shippensburg opened the scoring in the first inning with a bases-loaded walk, and a bases-loaded hit by pitch. Gannon (19-18) answered back in the bottom with an RBI-single to center field.

The Raiders scored one more run off a Golden Knight error. Sophomore Alyssa Nehlen reached base on an error by the shortstop and freshman Katelyn Minney scored on an obstruction to take a 3-1 lead in the top of the third inning. Gannon tied the score in the bottom with a two-run home run from Kristina DeMatteis. GU scored one more run in the fourth inning to take a 4-3 lead.

Shippensburg, looking to take the lead back, found its answer in the top of the sixth inning with a two-out, two-run single from sophomore Morgan Lindsay. However, Gannon seized an opportunity in the bottom of the seventh and tied the game 5-5.

In the eighth inning, sophomore Taylor Myers singled to right field and advanced to second on a sacrifice bunt by senior Morgan DeFeo. With one out, Marsteller sent a ball to left field for an RBI-double and a 6-5 lead. Relief pitcher, sophomore Emma Flattery allowed one hit in the bottom of the eight and got the last out by strikeout.

SU threatened in the opening inning, loading the bases with no outs. Bloomsburg stayed composed and stranded the Raiders with two strikeouts and a fielder’s choice. SU stayed aggressive in the next inning, hitting three consecutive singles with two outs to load the bases. All three runners then scored off a double to left center from Marsteller.

Bloomsburg promptly tied the game in the bottom of the second with an RBI-single and two unearned runs from a Raider error. BU scored a run in the fourth, fifth, and sixth inning to take a 6-3 lead.

In the top of seventh inning, the Raiders rallied with a single from Minney and back-to-back walks from Nehlen and senior Hannah Johnson. With no outs and the bases loaded, the Raiders scored one run on a wild pitch and an RBI-single from pinch hitter sophomore Maelynn Leber to reduce the deficit to one run.

After two outs, and with the bases still loaded, Marsteller ripped one to center field for a two-run single to give Shippensburg a 7-6 lead.

The Huskies entered the bottom of the seventh looking to stay in the tournament. Back-to-back singles placed two Huskies on base, and then a fielding error tied the game at 7-7.

Freshman Alicia Ball came in relief with Huskies on first and second and got the first out with a groundout, but the runners moved to second and third. BU then drew a walk to load the bases. Ball then worked a fielder’s choice at home for the second out. Alexis Wetzler drew a walk to give the Huskies the win.

Ball, Flattery and Uschock all pitched for the Raiders in the game. Marsteller finished the game 3-for-4 with five RBIs. Minney, Myers and Mackulin each had two hits.

Shippensburg (31-18) will now await the NCAA Selection Show (Monday, 10 a.m. on ncaa.com) to see if it is awarded a regional tournament bid. Bloomsburg (27-17) will face Shepherd on Friday in another elimination game.