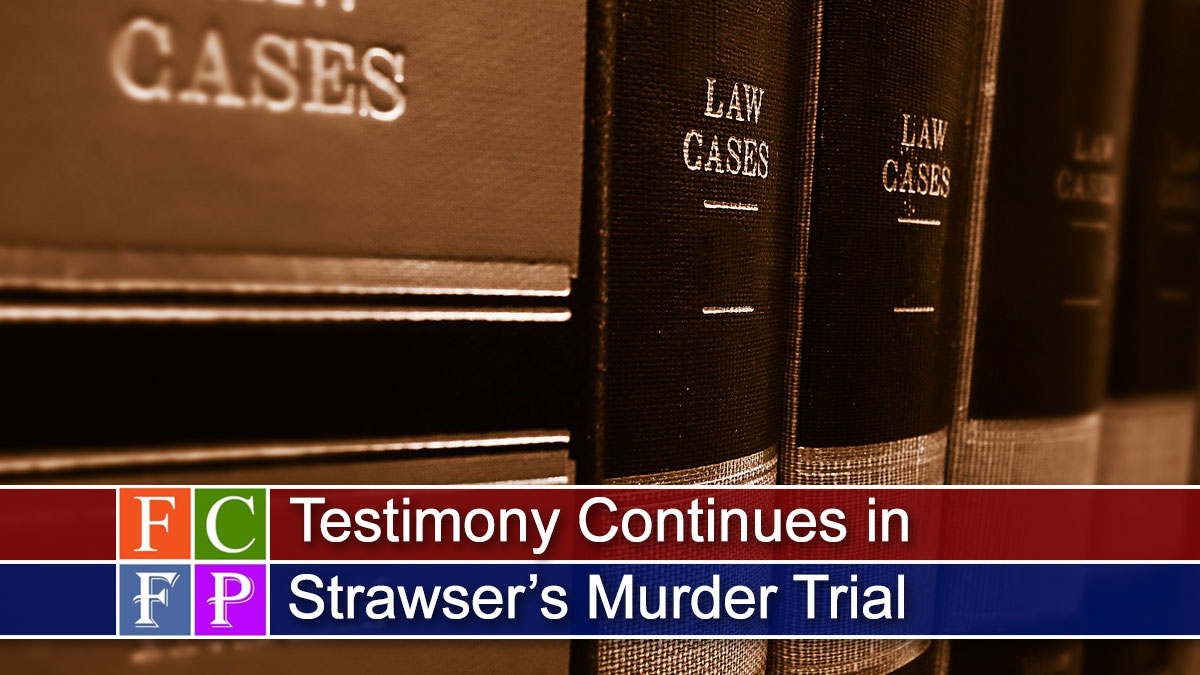 CHAMBERSBURG — Both the prosecution and defense in the John Wayne Strawser Jr. trial wanted answers to the same question Wednesday.

Why did Jamie and Courtney Breese wait so long to come forward with the information that eventually led to Strawser’s arrest for the 2014 murder of Timothy “Asti” Davison?

The Breeses were the first witnesses called as the third day of Strawser’s murder trial got underway in Franklin County Court.

Jamie Breese said he wondered if Strawser might have been responsible soon after hearing that Davison had been shot and killed on I-81 in the early morning hours of Jan. 4, 2014.

Police at the time thought the murder might have been triggered by road rage. With no witnesses, they put out a description of the vehicle the murderer was driving — a dark colored Ford Ranger. They wanted help in locating it and its driver.

Coincidence, or Something More?

Jamie Breese knew Strawser drove the same kind of vehicle. A short time before Davison was run off the road and killed, Strawser had threatened to kill Breese. At the time Breese and his wife Courtney were returning to Waynesboro from West Virginia driving north on I-81.

Breese drives a silver-colored Honda SUV. Davison was driving his father’s silver-colored Mitsubishi SUV, returning from Florida to his home in Maine.

Jamie Breese testified that he wondered if Strawser might have mistaken Davison’s vehicle for the one he and Courtney were driving that night. But, he said, he wasn’t sure and didn’t want to falsely accuse him.

Defense Attorney Kristopher Accardi grilled Breese about his motives for contacting police 16 months later, suggesting he was motivated by a reward for information that had grown to $62,000 and revenge because Strawser had an affair with Courtney Breese.

Breese, upset, said he was just trying to do the right thing but didn’t believe Strawser to be capable of murder at first.

1 Priority: ‘To Tell the Truth’

District Attorney Matt Fogal asked Courtney Breese what he had told her the number one priority would be when she was called as a witness.

“To tell the truth,” she answered.

She admitted on the stand that she had a brief affair with Strawser in late 2013 at a time when her marriage was “rocky.” She said he became angry when she tried to end the affair.

Courtney Breese also testified to the same telephone conversation her husband had earlier told the court about as they returned to Pennsylvania from a bar in West Virginia the night of Jan. 3, 2014.

She said she doesn’t follow the news closely and at first thought Davison had died as the result of an auto accident. When she was told he had been murdered, she still didn’t associate it with Strawser.

That changed in April 2015. A friend called her to warn her that police were looking for Strawser in connection with the murder of his ex-girlfriend, Amy Lou Buckingham. She knew Courtney had at one time had a problematic relationship with him and was worried.

She spent a restless night thinking and worrying about it, Courtney Breese testified. Now her husband’s suggestion that Strawser might have been looking for them that night seemed more reasonable.

Strawser was later convicted of Buckingham’s murder and sentenced to life in prison in West Virginia.

One of those witnesses also testified Strawser owned a Rossi Ranch Hand .44 caliber gun like the one police had already determined was the type used in Davison’s murder.

On Friday other experts will be called as Fogal tries to tie the multitude of evidence police gathered at the crime scene to Strawser. He is expected to call his last witnesses on Monday.

Accardi will begin his defense case either Monday afternoon or Tuesday morning. The trial is scheduled to run through Friday but could go to the jury earlier, depending on how many witnesses the defense calls.

Vicky Taylor - March 23, 2020 0
In the middle of concerns over the spread of the Coronavirus pandemic and orders from authorities to stay at home until it abates, people continue to get out and break the law.

Man Attempts Suicide as Police Show up to Arrest Him on...