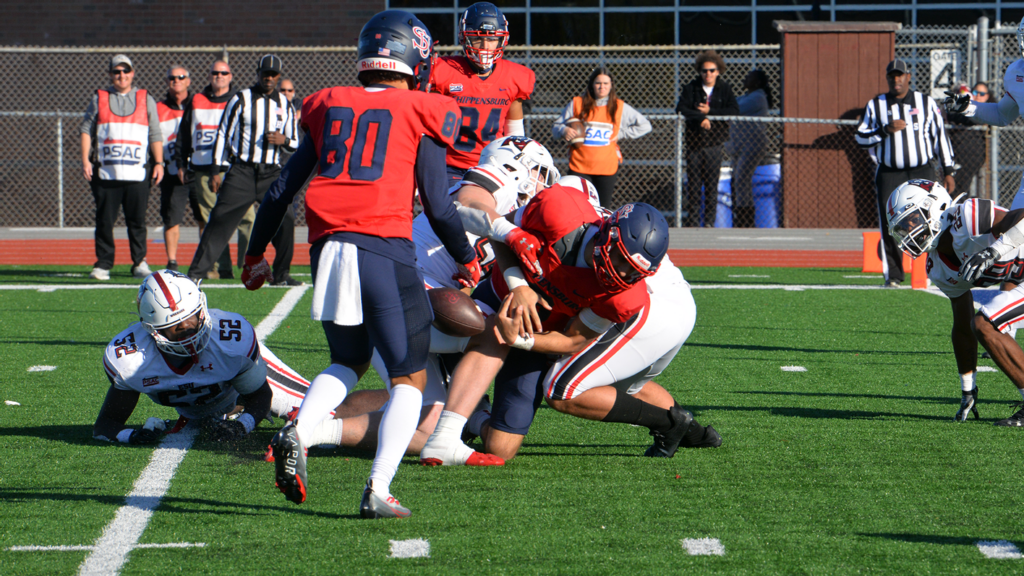 Shippensburg (3-6, 2-4 PSAC East) fought to turn a 17-0 halftime deficit into a one-possession game late, but a pair of costly fumbles inside the final 3:38 of the fourth quarter derailed the Raider comeback.

East Stroudsburg (4-5, 3-3 PSAC East) scored 17 points in the second quarter and got a pair of fourth quarter field goals from kicker Devin Bartholomew to hold off the Raider surge. Ten of their 17 points came as the result of Shippensburg turnovers.

East Stroudsburg quarterback Jake Cirillo recorded a 7 yard TD run early in the second half to open the scoring. Thanks to a penalty on the ensuing kickoff, Shippensburg began the next drive deep in its own territory. Freshman quarterback Evan Falco (Mamaroneck, N.Y./Rye Neck) scrambled to avoid a possible safety, but East Stroudsburg defensive lineman Deshawn McCarthy’s strip sack ended with Isaiah Reigel recovering the ball for ESU on the 1 yard line.

Motivated by their lackluster first half performance, the Raider offense rallied in their opening drive of the second half.

Senior running back Khalid Dorsey (York, Pa./York (Howard)) had gains of 10, 17 and 14 yards to get the Raiders on the doorstep, and Falco completed the 65 yard drive with a pass to senior Xavier Roman (Lancaster, Pa./Manheim Township) in the endzone for a 7 yard Shippensburg touchdown.

The Raider defense held up their end, forcing the opposition into three consecutive three-and-out possessions, and late in the third quarter, Falco found sophomore wideout Redd Douglas (Youngstown, Ohio/Chaney (Wooster)) on a simple swing pass that Douglas broke for a big 48 yard gain.

On the very next play, Dorsey weaved his way through traffic for a 7 yard touchdown run. A miss on the ensuing extra point attempt resulted in a 17-13 margin through the first three quarters of play.

The momentum appeared to fully shift over to the Shippensburg sideline early in the fourth frame. Redshirt-sophomore cornerback Khi’on Smith (Deptford, N.J./Deptford Township) forced an East Stroudsburg fumble that was pounced on quickly by senior linebacker Tyler Simon (Manheim, Pa./Manheim Central) for an ESU turnover.

After taking over possession near midfield, the Raiders made their way down to the East Stroudsburg 6, but ultimately settled for a 31 yard field goal from Tanner Luther to make it a one point game, 17-16.

ESU answered with a long field goal from Bartholomew, this one from 42 yards out, to regain the four point cushion.

A forced fumble on the ensuing kickoff stalled the Ship momentum, but the Raider defense held the Warriors to another field goal to make it still a one possession contest with 2:26 remaining, 23-16.

With the game on the line, Falco had perhaps his best drive as a Raider, converting a number of clutch throws to achieve a first and goal from the six yard line.

On first down, Falco called his own number, but was stopped just short of the goal line. A forced fumble by McCarthy at the end of the run was recovered by ESU linebacker Sergei Felizor to end the comeback threat.

Falco finished the game 16-of 22 in pass attempts for 201 yards, including a touchdown.

Dorsey notched 60 yards on 15 totes on the ground.

Bartholomew went 3-of-5 in field goal opportunities for the Warriors. Cirillo tallied 14-of-31 passing for 158 yards.