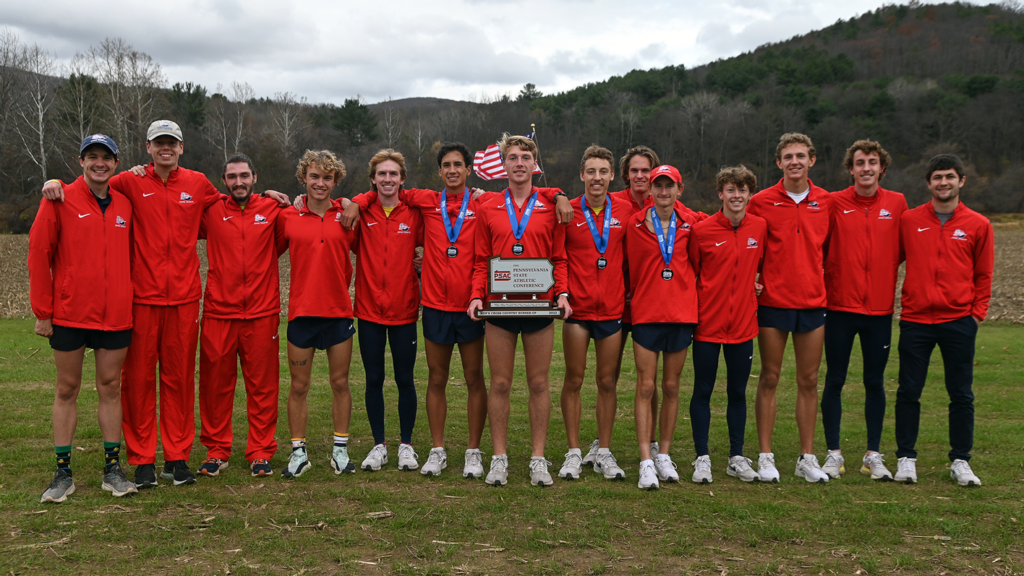 The Shippensburg University men’s cross country team had all of its scorers finish among the Top 16 on Saturday at the 2022 Pennsylvania State Athletic Conference (PSAC) Championships, resulting in a second-place team finish in 8K competition hosted by Mansfield University on its Lamb’s Creek Course.

Shippensburg scored 55 team points, but it was not enough to get past Edinboro (33 points), who won the conference title for the fifth consecutive year. The Raiders and the Fighting Scots combined to put nine runners among the Top 15 overall finishers to comprise exactly three-fifths of the All-PSAC First Team.

SU had a different No. 1 scoring runner in four of its five regular-season races entering the meet, and the trend continued Saturday. Freshman Garrett Quinan (Stewartstown, Pa./Kennard-Dale) delivered a sensational performance to lead the Raiders with a sixth-place time of 25:27.9 – his first meet at the top-finishing Raider and one of just two freshmen among the Top 20 league finishers.

A storybook season continued for senior Nathan Harding (Mohnton, Pa./Governor Mifflin), who had the race of his life on Saturday to deliver a 12th-place time of 25:45.1 and earn an All-PSAC First Team medal. Harding’s training and determination resulted in a 14-second PR – his third consecutive meet this season in which he achieved a personal best. Prior to two weeks ago at Lock Haven, Harding had never broken the 26-minute mark in a cross country 8K.

Rounding out the Raider scorers was junior Joey Cintavey (Newark, Del./The Tatnall School), himself having a tremendous breakthrough season as a veteran. Cintavey was one spot shy of an All-PSAC First Team performance and was the fifth Raider to break the 26-minute mark, crossing the finish line in 25:56.1.

Cintavey, running cross country this season for the first time since his freshman year in 2019 when he finished 99th at the conference meet, also pulled off a nearly impossible feat by matching his exact time he ran at Mansfield on Oct. 8 at the Ed Winrow Invitational, down to the tenth of a second.

Freshman Ryan Wolfe (Lebanon, Pa./Cedar Crest) made it six All-PSAC Raiders by delivering a 29th-place finish in 26:17.6. Wolfe, running his fourth collegiate 8K cross country race, was yet another Raider with a breakthrough performance. He destroyed his previous season best (set a month ago at Mansfield) by 38 seconds with his Saturday run.

Shippensburg has now finished in second place in the team standings at three straight conference championships and at four of the last five conference meets overall. It is the 20th time in school history that the Raiders have been the conference runner-up dating back 45 years; 1978 was the first season that SU finished second at the conference meet.