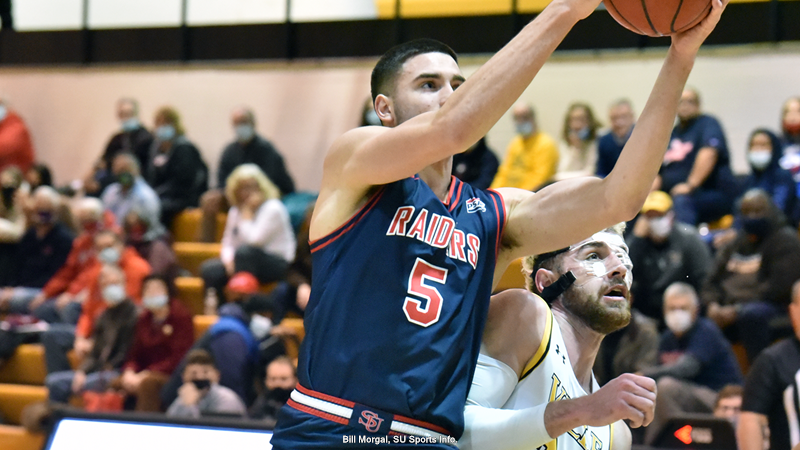 Shippensburg (9-3, 6-1 PSAC) committed just one turnover in the first half and just three turnovers through the first 35 minutes. SU also posted a 15-0 advantage in points off turnovers during the first half. It was a 13-5 run over the final 3:28 of the first half that established a 42-32 halftime lead.

The Raiders shot 51 percent from the field in the first half, including 6-of-11 (54.5 percent) from three-point range. Junior Carlos Carter (Indiana, Pa./Indiana) and senior Kiyon Hardy (Philadelphia, Pa./The Shipley School (Kutztown)) each had 13 first-half points, with Carter shooting 3-of-3 from three-point range.

Millersville (9-4, 3-4) switched to a full-court press down the stretch and got within 10 points of the Raiders in the final two minutes. SU’s largest lead of the game was 17 points with 4:01 left.

Hardy finished with 19 points, one short of his career high set Wednesday against Seton Hill. It’s his fifth game in double figures this season and the 20th such game of his career. He added six rebounds and two steals.

Carter finished with 17 points and seven rebounds. He matched his career high with four steals, all recorded in the first half.

Millersville got 17 points and 10 rebounds from Caden Najdawi, and 13 points each from Justin Nwosu and Jaden Faulkner. Nwosu made three three-pointers in the first half.

The Marauders entered the game with the second-best rebound margin in the PSAC (+8.4) but the game finished even in rebounds at 38-38.

SU extended its winning streak to seven games, and has held opponents to 66 points or less in six of those seven victories.

Shippensburg’s next scheduled game is 8 p.m. Wednesday at Mansfield. Monday’s game at West Chester is postponed.