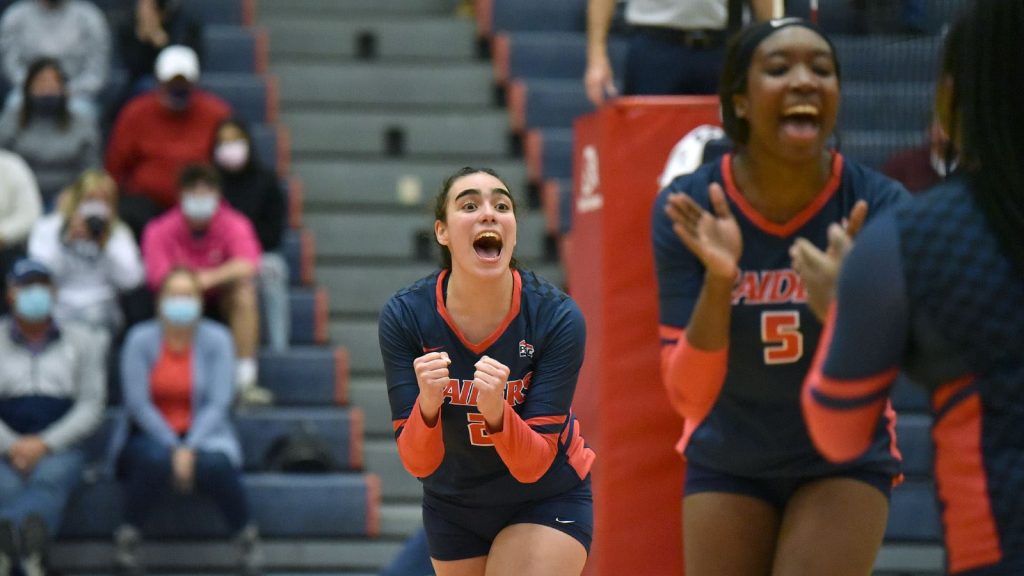 SU secured another volleyball conference win Friday with a 3-1 victory over Kutztown at Heiges Field House before losing on Saturday to East Stroudsburg.

Inside the box score on Friday

Shippensburg (11-13, 4-5 PSAC) had two players with double-doubles. Reigning Pennsylvania State Athletic Conference (PSAC) Eastern Division Athlete of the Week Emily Gardner (Avon, Ohio/Avon) posted her eighth double-double this season with 14 kills, 18 digs and three blocks. Gardner hit an efficient .364 from the floor and committed only two errors. Freshman Kat Negron (Longwood, Fla./Lyman) had her sixth double-double this season with 11 kills and 15 digs, the latter of which tied a career high.

Kutztown (7-15, 2-7 PSAC) had three players with double-digit kills. The Raiders hit .209 compared to .174 for the Golden Bears. KU served seven aces to SU’s five, including three straight by Sadie Doss to end the third set.

How it happened Friday

In the second set it was back and forth. The Raiders went on a 5-2 run at 14-14 only for the Golden Bears to lead the set at 23-22. A crucial dump kill from Letchworth tied tie the score, 23-23 and kills from Verhoef and Gardner were enough to close the frame and make it 2-0 for SU.

The Raiders came back strong in the fourth set, winning the first five points. At 6-6, Gardner went on a six-point service run to give the Raiders the lead. SU led by as many as 10 points in the final set.

In the box score Saturday

How it happened Saturday

In the opening set, the Raiders led 12-5. The Warriors found their hitting rhythm and went on a 10-3 run. A few errors from SU secured the set for ESU.

In the second set, the Warriors won the first five points and only committed two errors to win the frame.

The Raiders fought back in the third set and tied the score at 16-16, but the Warriors went on an 8-2 run and never looked back.

Shippensburg will be back next week at Heiges Field House for its last two home conference matchups, beginning Friday at 7 p.m. against Bloomsburg.