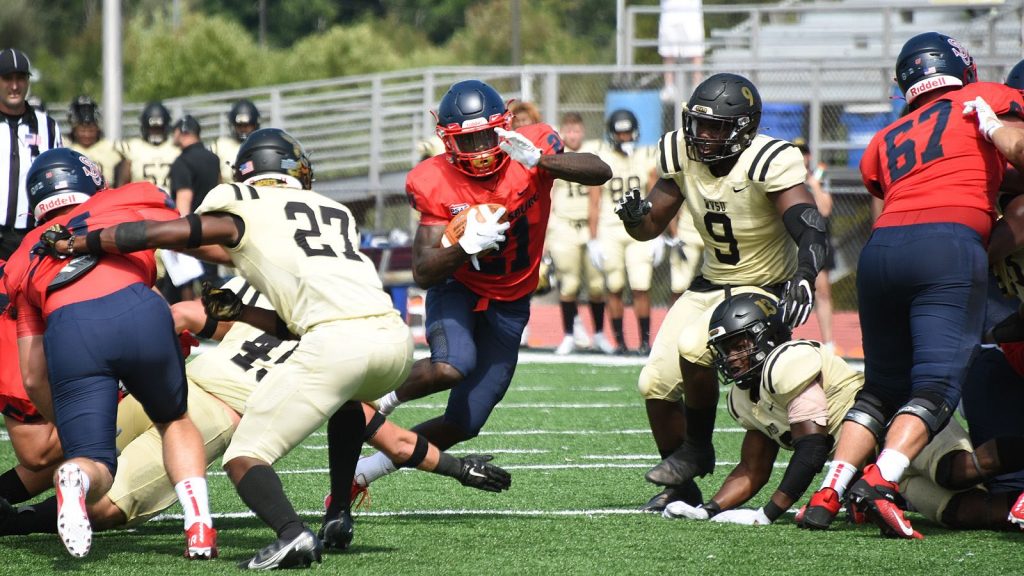 SU’s football team flipped a 10-point deficit into a 12-point lead on Saturday afternoon to claim victory in its 2021 season opener, posting a 25-17 win over West Virginia State in front of a large crowd at Student Association Field at Seth Grove Stadium.

Shippensburg (1-0)’s defense showed up in the form of 10 tackles-for-loss (TFLs), including five sacks, and forced three turnovers – including a 22-yard scoop and score by senior lineman Cameron Tinner (Shippensburg, Pa./Shippensburg Area) on his sack with 9:14 remaining. The defense limited West Virginia State (0-1) to 160 yards of offense after its opening drive of the game, including just 40 total rushing yards.

SU also got four field goals from freshman kicker Jaxson Montross (Tunkhannock, Pa./Tunkhannock Area), one of multiple Raiders making their collegiate debut. Montross’s fourth and final field goal was a school-record 50-yarder with 1:24 remaining that created the final scoring margin. That kick came after he previously made field goals of 41, 42 and 20 yards.

The running back tandem of sophomores Khalid Dorsey (York, Pa./York (Howard)) and Bill Williams (Camp Hill, Pa./Camp Hill) combined for 151 rushing yards on 36 carries. Dorsey ran 21 times for 90 yards, while Williams had 15 carries for 61 yards. Both men averaged more than 4.0 yards per carry.

SU’s only points of the first half were two field goals by Montross, with the second coming at the halftime horn. The only points of the third quarter by either team resulted in a 13-10 Raider lead, as an 11-play, 58-yard drive culminated in an eight-yard touchdown pass from junior quarterback Brycen Mussina (Montoursville, Pa./Montoursville (Lafayette)) to sophomore fullback Jared M. Smith (Martinsburg, Pa./Central Martinsburg).

A 12-play, 70-yard drive early in the fourth quarter stalled in the red zone and resulted in Montross’s third field goal and a 16-10 score. The game’s decisive moment came on the ensuing drive. With Yellowjacket starting quarterback Donovan Riddick on the sideline due to an injury, Tinner arrived at backup quarterback Drew Chance on third down, swatted the ball from his hand, grabbed the resulting fumble on a bounce and made his way into the end zone. The margin was 22-10 in SU’s favor after a failed two-point conversion.

West Virginia State did not relent and answered immediately. Riddick completed two passes for 18 yards, then ran for 15 yards, and then threw a 32-yard touchdown pass to make it 22-17. After an exchange of punts that resulted in a short field for Shippensburg, Mussina extended the chains once with a 10-yard scramble on a third down to preface Montross’s school-record 50-yard field goal.

Down by eight points with just 78 seconds remaining and no timeouts, the Yellowjackets’ final rally ended with senior safety Trey Paul (Harrisburg, Pa./Central Dauphin) intercepting a pass and returning it 39 yards to the 1-yard line. Paul’s pick was one of two on the day for the Raiders, as junior Dante Witcher (Camden, N.J./Timber Creek) pilfered a pass in the first half.

How they did it

Shippensburg is on the road for its next two games, beginning next Saturday at Edinboro with a noon kickoff at Sox Harrison Stadium.

Notes: Saturday marked SU’s football team’s first game in 658 days, as SU’s 2020 football season was canceled due to the ongoing pandemic. Saturday also marked the first time that an SU kicker made four field goals in a single game since Jamie Reder did it on Oct. 8, 2005 at Lock Haven. Prior to Saturday, the previous school-record field goal was 49 yards by Drew Newcomer at Slippery Rock on Sept. 14, 2013. Montross made three field goals of 40 or more yards on Saturday. By comparison, SU kickers made just one field goal beyond 40 yards over the last three seasons (2017-19). Jared Smith, a converted linebacker, scored his first collegiate touchdown in his first game as an offensive player.