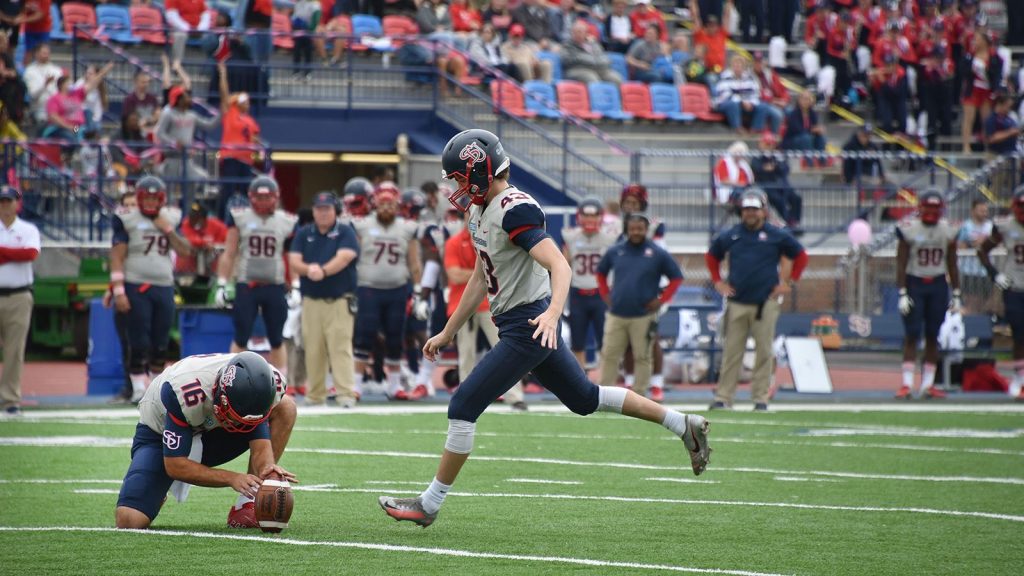 SU’s Raiders were kept out of the end zone on Saturday at No. 25 Kutztown, dropping a 20-3 decision to the Golden Bears on a rainy and humid night at Andre Reed Stadium.

Shippensburg University (5-2, 2-2 PSAC East) managed just 143 yards of offense against the host Golden Bears and was held without a touchdown for the first time since its last meeting at Kutztown in 2019.

Kutztown (6-1, 4-0) put forth a ferocious defensive effort that included seven sacks of Mussina, an interception and 10 tackles-for-loss (TFLs). Offensively, the KU run game was the difference as four different tailbacks combined for 235 yards on the ground. Quarterback Eric Nickel, who was just 6-of-18 passing, ran in two of the three Golden Bear touchdowns.

SU got on the board in the first quarter when graduate long snapper Dylan Curtis (Lincoln University, Pa./Avon Grove) recovered a fumble on a muffed punt. Freshman Jaxson Montross (Tunkhannock, Pa./Tunkhannock Area) kicked a 34-yard field goal to give the Raiders a 3-0 lead that would last through the end of the first quarter.

Kutztown used a 14-play, 78-yard drive to take a 6-3 lead in the second quarter. Golden Bear punter Dean Krcic, the reigning PSAC Eastern Division Special Teams Athlete of the Week, later trapped the Raiders inside the 5-yard line. KU capitalized on the subsequent short field after an SU punt, and needed just three plays to go 27 yards to take a 13-3 lead that lasted to halftime. SU was limited to just 45 yards of total offense and was 0-for-7 on third down in the first half.

KU muffed another punt early in the third quarter, but the Raiders were unable to recover the subsequent fumble. The Golden Bears responded with an eight-play, 72-yard drive – all runs – to score a touchdown and take a 20-3 lead. The SU defense used a fourth-down stop later in the third quarter to prevent the Golden Bears from adding to their lead.