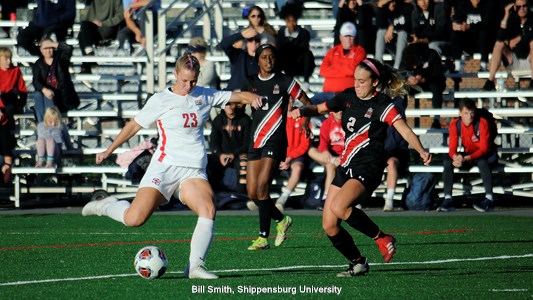 Shippensburg (4-10-1, 4-8-1 PSAC East) posted a 6-3 advantage in shots on goal and a 4-1 advantage in corner kicks, but could not come back from a two-goal deficit sustained in the first half.

East Stroudsburg (8-6-1, 6-6-1) got its first goal less than 10 minutes in when Natalie Schooley passed the ball to the right side of the box to Millie Smith who struck it in the bottom left corner. In the waning minutes of the first half, Caitlynn Leffler scored off a Corryn Gamber assist.

Freshman Morgan Molyneaux (Harleysville, Pa./Souderton) was credited with one save as she made her second collegiate start in goal. Mauri Jackson made six for the Warriors.

Shippensburg (4-8-3, 2-8 PSAC East) trailed in the second half but equaled the score when a cross from senior Harry Kershaw (Wardle, England/Wardle Academy) was sent into the net by a Warrior defender.

East Stroudsburg (6-6-2, 4-3-2) nearly opened the scoring early in the second half but a goal was negated due to an offsides call. ESU later scored in the 69th minute after Alexander Andersen scored off a rebound from Colby Raymond’s shot that was saved by freshman Ryan Glenlast (Lancaster, Pa./Pequea Valley).

In the 79th minute, East Stroudsburg struck again off a Raymond penalty kick which proved to be the game winner.

Shots on goal were 7-5 in Shippensburg’s favor, while corners were 3-1 in East Stroudsburg’s favor. Glenlast finished with three saves, while ESU’s Ray Fortebuono made six saves.