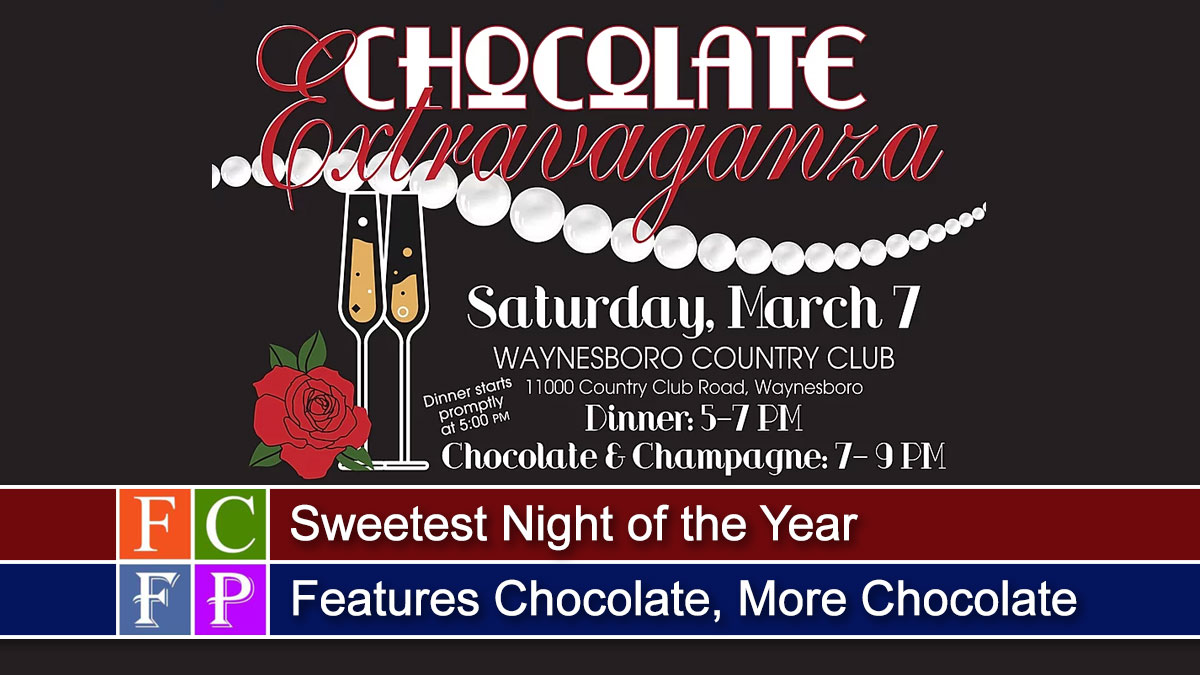 The “sweetest night of the year” returns this year as Mainstreet Waynesboro plays host to the Chocolate Extravaganza on March 7 at the Waynesboro Country Club, 11000 Country Club Road.

The event raises money for Mainstreet Waynesboro while showcasing the community’s downtown chocolate stores and other restaurants.

Mainstreet Waynesboro is an independent nonprofit depending solely on donations and money made through events and fundraisers.

Waynesboro Country Club Chef Jeffrey Raimo created the menu for the four-course dinner. Everything on the menu will have a chocolate element, even the main dish — pepper-crusted beef tenderloin with a chocolate port sauce.

Each table of eight will also have a carafe of House Red wine.

Ten chocolate purveyors will have their chocolate delicacies set up at the event from 7 to 9 p.m.

Live music featuring Three Professors of Jazz is on the entertainment tab. Howard, Jordan and Anita will play favorite jazz standards, along with a few surprises.

Tickets for the dinner and the Chocolate Extravaganza cost $75 per person or $125 per couple.

Tickets for the Chocolate Extravaganza portion cost $25 per person.

Each guest will receive a complimentary champagne glass and tickets for two free glasses of champagne.  A cash bar will be available.

Tickets are also available at The Candy Kitchen, Christine’s Café, Waynesboro Country Club and Zoe’s Chocolate Co. Those locations accept only checks or cash for the tickets, however.

There will be a silent auction and silent raffle.  Items include:

At this time, sponsors of the festival are:

Bill Kohler, Mainstreet’s director of economic development stressed the importance of events such as the extravaganza.

“The Chocolate Extravaganza helps us raise funds while ensuring that we can continue our mission of attracting people to downtown well into the future,” he said.

Angela Smith, event coordinator/administrative assistant for Mainstreet Waynesboro, points to the importance of such events to the community.

“Mainstreet Waynesboro has been organizing annual community events for years, “ she said. “We are incredibly pleased that we can offer a variety of events all year long to showcase all that Waynesboro has to offer.”

Additional sponsorships are welcomed. Anyone interested in supporting the project can call 717-762-0397 or send an e-mail to [email protected].

Staff Report - April 7, 2020 0
Marlin was a very happy, light-hearted person who loved talking, laughing, singing, and dancing. As a hobby, he collected and sold items. He also liked watching sports of any kind but he especially enjoyed being a Philadelphia Phillies and Eagles fan.

Getting Ready for a Cappella & Unplugged