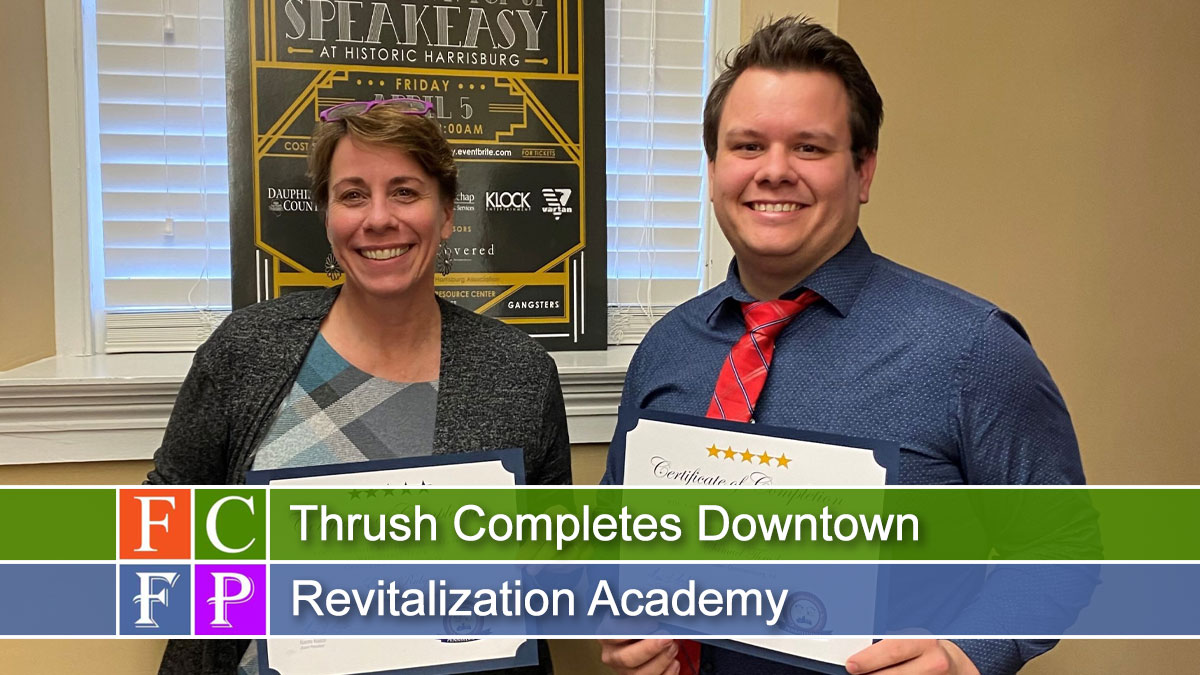 Sam Thrush was well-prepared to lead Downtown Chambersburg Inc.’s revitalization efforts when he was appointed its president in 2018.

Thrush holds a B.A. from Shippensburg University in Geography and Land Use; interned at the Borough of Chambersburg and Downtown Chambersburg Inc.; held a position as County Planner for the County of Bedford; spent six years in the Franklin County Planning Commission, and holds of a number of municipal planning and place economics certifications.

This week, Thrush expanded that base of knowledge, completing a 75-hour Community Revitalization Academy (CRA.)

The training is a series of five, two-day workshops based on the National Trust for Historic Preservation’s Main Street Program and the five-point approach of the Pennsylvania Elm Street Program. It is designed for first-year Main Street and Elm Street managers, as well as other revitalization professionals.

CRAs run from 9 a.m. to 4:30 p.m. at Harrisburg’s Pennsylvania Downtown Center’s office. Managers have two years from their hiring date to complete the series. They must complete at least three sessions within the first year.

It’s ideal for managers to complete the CRA during their first year on the job, Wherley said. But fitting in the sessions can be a challenge for many, who often are the only full-time staffers in their organizations.

The course is based on four points set by the national organization Main Street America. Those include organization, physical improvements/design, community marketing and asset enhancement. It also features a safe, clean and green element, during which block-watch concepts, crime prevention and cleanup programs are explored.

On average, there are 12 to 15 participants in each session. While some are new hires, program board members, committee volunteers and part-time program staff also attend.

Thrush completed the program when he attended the Feb. 26-27 session on asset enhancement. That session explored how downtown managers can link their community’s vision with their economic-development strategy. Topics covered included vacant lots, real estate and social-service organizations.

Thrush looks forward to putting what he’s learned into place.

For instance, he hopes to have downtown sidewalks power washed, a practice he heard about during the safe, clean and green session.

Ideas shared during the course’s organizational development segment for building a volunteer base and developing their skills to expand community engagement excite him.

He already uses e-blasts and is active on social media, strategies shared during the marketing portion of the training. Facade-improvement programs were also discussed.

He has already been instrumental in DCI’s success in getting a Pennsylvania Department of Community and Economic Development grant to help restore the commercial area on Main Street between Falling Spring Creek and Washington Street.

Thrush said he also would like to have more flowers planted to beautify the downtown area.

He commuted to Harrisburg for the program – a little more than 50 minutes each way. He said the driving and hours spent in training were worth the effort.

“The networking has been awesome,” Thrush said.

Wherley said many who have completed CRA training put their knowledge to use with positive results, including reinvestment and strategic partnerships, as well as “expanding programs in core downtowns based on the commitment to creating high-quality places and building stronger communities through preservation-based economic development.”

For details about the Pennsylvania Downtown Center and the CRA, go to padowntown.org.

Staff Report - April 4, 2020 0
No matter what happens, we go through this all together and we all come back and work together towards success and help each other.

Local entrepreneurs talk about surviving a pandemic, and thriving