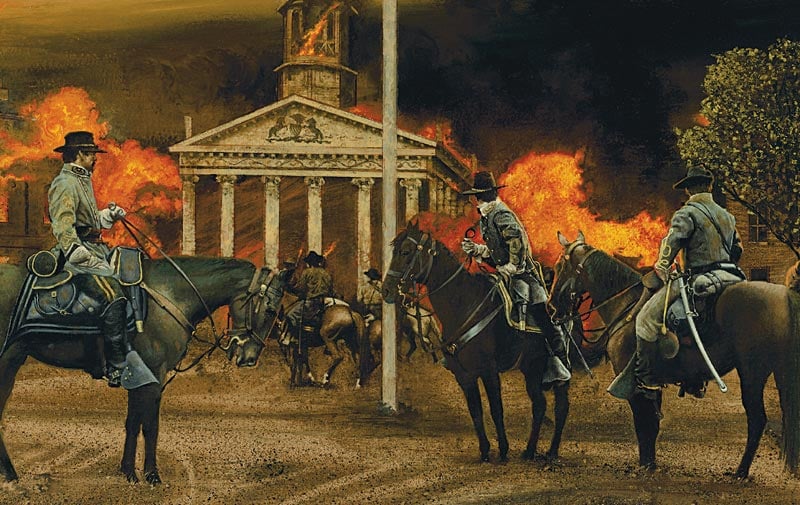 Yesterday, we left off our story with attorney J.W. Douglas, being provided a copy of General Early’s order. He was sent to tell the townspeople that the rebels would burn the town if they did not provide the required ransom.

“I then went up Market Street” and told everyone I met of the rebel demand. Douglas later recalled. “ They generally laughed at first, and when I spoke earnestly about the terrible alternative, they said they were trying to scare us and went into their houses. I then went up Main street in the same manner and with the same results.

Could not pay the ransom

Other detainees have told McCausland that bank funds had already been removed and sent north for safekeeping. When Douglas informed McCausland that he could find no money, the general had the courthouse bell rung to call the citizens to the square and then ordered his troops to burn Chambersburg. They waited for six hours, to give a formal expiration, and the soldiers sieged through town.

Rampaging through the town, confederate soldiers broke into houses and evicted residents, smashed furniture, heaped the pieces into a pile and then set them on fire. By 8 am the city was in flames. As the city burned,renagade soldiers robbed citizens, looted stores, and drank whatever liquor they could find.

Members of Chambersburg failed to raise the ransom, and so the cavalrymen burned the town down, destroying more than 500 structures and leaving more than 2,000 homeless, Damage was estimated at more than 1.6 million, and Chambersburg was left the only Northan town that the confederates destroyed.

READ PREVIOUS: Countdown to 1864: Confederates demanded $500,000 to save Chambersburg

READ NEXT: Countdown to 1864: Chambersburg was Rebuilt by 1866, better than before