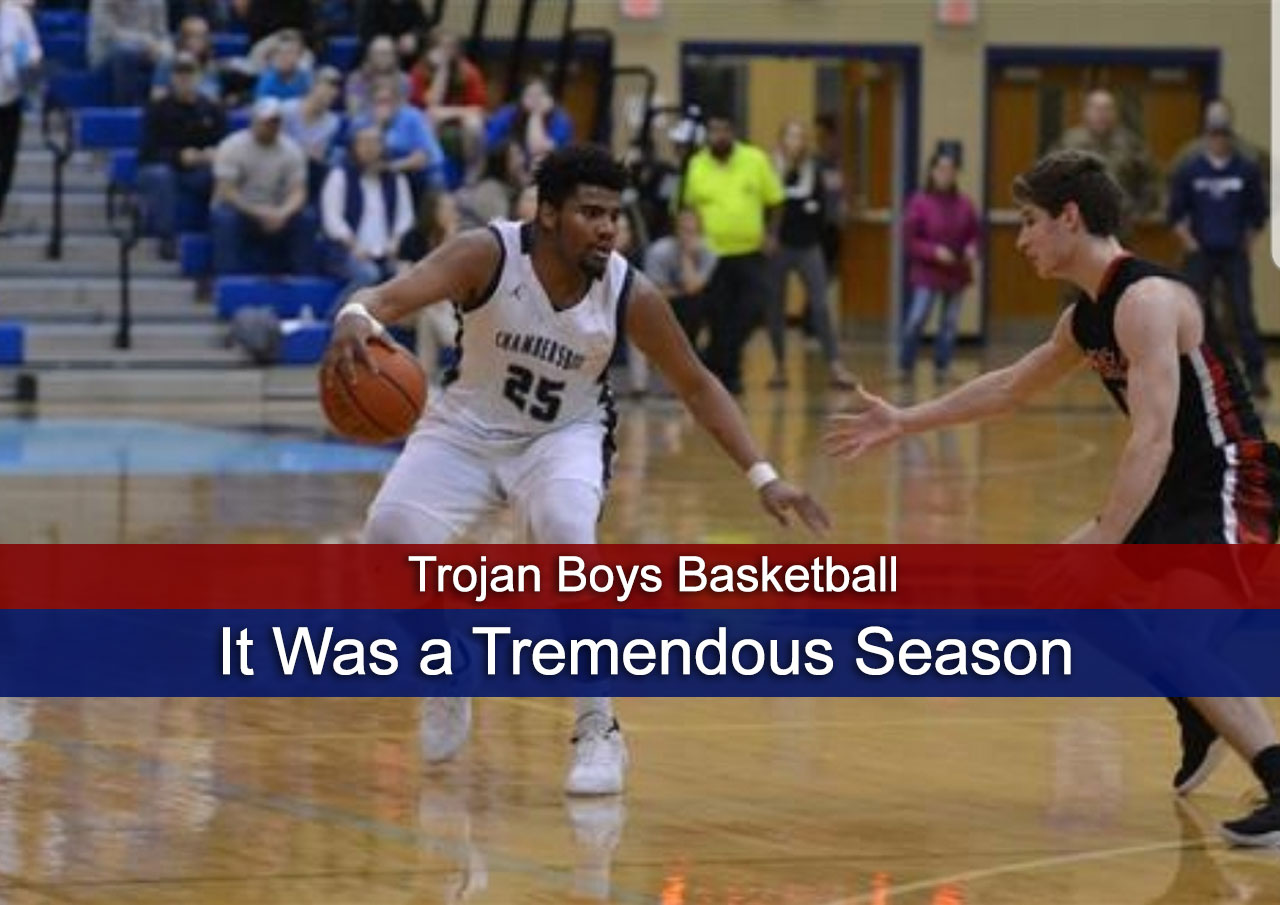 Editor’s Note: the following article was written by communications & marketing intern Ian Frazier. Ian is a senior at Wilson College majoring in Communications with a minor in Sport Management.

CHAMBERSBURG — The Chambersburg Trojans Boys Basketball team began the year knowing they could have a good season, but what they ended up accomplishing far exceeded expectations.

They finished the season with a Mid-Penn Commonwealth division title, making it to the semifinals of the 6A District III Playoffs, and qualifying for the PIAA 6A State Playoffs.

There were many things that contributed to the Trojans impressive season and Head Coach Shawn Shreffler attributes much of the success to culture.

“There is a really strong culture that exists right now within our program,” said Shreffler. “As a result of that culture, many players are committed to working extremely hard in the offseason to get stronger and improve their skills.”

Another reason the Trojans had high hopes for this year stemmed from their winning experience. Over the past four seasons, players in the program had seen their record rise from 8-13 to 11-11 to 13-9 and finally to 19-6 the previous year.

“Many of our players have experienced success collectively and are extremely competitive, so winning has become an expectation every time we take the floor, which helps feed our strong culture,” said Shreffler. “I told our players that we had enough in this locker room to win a division title this season. That’s not something I normally say, but I felt very strongly about it this year.”

The Trojans bought into that belief and ended the season with a record of 20-8, winning their first Mid-Penn Commonwealth division title in twenty years, playing in the Mid-Penn Championship game, making it to the semifinals of the 6A District III Playoffs, and qualifying for the PIAA 6A State Playoffs.

Road to Success Not Easy

However, the road to success was not easy for Shreffler’s bunch, as the season did not start the way the team had envisioned.

“Most teams can expect to experience at least two different types of adversity during a season,” explained Shreffler. For the Trojans, those types of adversities were Injuries and losing games.

The Trojans suffered two injuries at the beginning of the season. One of their expected starters was injured during the football season, so the team was without his contributions until late December.

“At least that one we knew about before [the season] and had time to adjust,” Shreffler said of the injury.

Then, on the first night of tryouts, a second expected starter injured his knee and would not return until late December. Those injuries ended up creating a wall of adversity at the very beginning of the season that set the Trojans back a bit.

“As a result of our lack of experience and reduced depth, we lost two league games prior to the New Year, which put us two games back of the division leaders right out of the gates,” added Shreffler about the early year struggles.

From that point on, if the team wanted to win a division title, they needed to be almost perfect the rest of the season and have a little luck and good fortune thrown their way from other teams.

The team did just that as they navigated their way through early struggles and closed the season out on a 10-game winning streak in which they beat all three league teams they had lost to during the first half of the season.

Throughout the season, the Trojans were able to dominate two key areas of the game, rebounding and defense. They held a decisive margin on the glass, pulling down 930 total rebounds over the course of the season compared to the 626 total rebounds they allowed against them. The Trojans also held their opponents to 41.2 points per game which was best in their league.

“We had different makers inside. Most teams could not match the combined size of our three bigs and we took advantage of that by scoring more points in the paint than our opponents, plus we had a decided edge on the boards in the majority of our games,” said Shreffler.

From Coach-Led to Player-Led Team

Another huge part of the team’s success was due to the team’s process of evolving from a coach-led team to more of a player-led team. Seth Brouse and Ty Holsopple were two key leaders in that transformation.

One of the main ways Brouse stepped into a leadership role was on the court during games.

“I got better at controlling the tempo of the game, not letting the other team speed us up, and just being able to calm everyone down,” Brouse said, attesting to his role on the team.

Something from the season that really stuck with Brouse was their accomplishments.

“[The practices] were always really scheduled and [Coach Shreffler] made us really prepared. We always had practice plans which really helped us,” said Brouse of the preparation they put in before games.

Leading this team was easier than expected because the team fed off their competitive fire throughout the whole season, according to Holsopple.

“Everyone is just so competitive and everyone wanted to win. Everyone pushed each other to be better,” said Holsopple.

Sports often has a way of bringing a community together. This Trojans’ basketball team reaped the benefits of having committed, positive community backing them.

“It was a truly special season. The amount of community support this year was amazing,” said Shreffler. “It began with unbelievable monetary support through our program ads and sponsorships and continued with the backing of our student body via tremendous participation from our pep band, CASHS Crazies, and Trojan cheerleaders who were all supported by our administrators, faculty, and staff.”

Every time the players step foot into the field house, they will look up at the division championship banner they helped to hang and will be reminded of their historic season. History never dies, and neither will the memory of this team. That is the reward for being a part of the team that brought home the first Mid-Penn Commonwealth Boys Basketball division title in 20 years.

Statistical Leaders From the Season: