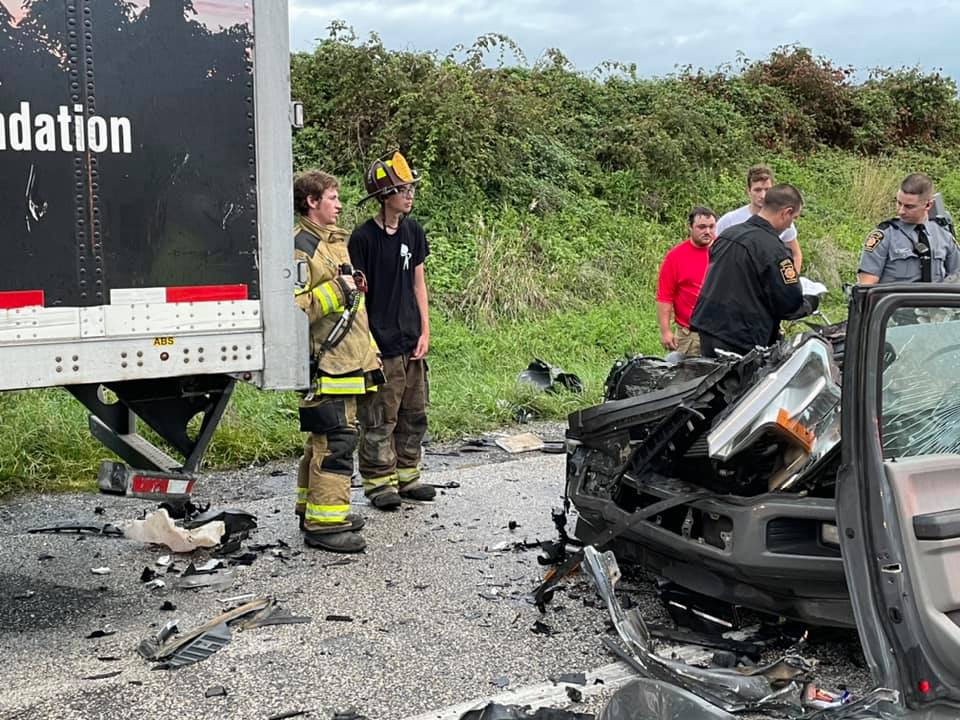 Two fatalities took place on Franklin County roads in separate crashes this week. A pedestrian died after walking in front of a car on Philadelphia Avenue Thursday evening. That fatality followed one on Wednesday when a man from Mexico died in a two-vehicle crash on I-81 just north of Marion.

The first of the two fatalities happened early Wednesday morning.

A pickup truck tried to pull into the entrance ramp of an I-81 weigh station at 6:18 a.m. and hit an illegally parked Volvo tractor-trailer rig. Pennsylvania State Police said Matthew D. McCloud, 26, of Chester, S.C. was driving the Ford F150 XLT pickup truck south on I-81. Alan U. Redin, 18, of Jalpen De Serra, Mexico, was a passenger in the pickup.

McCloud pulled off the highway onto the weigh station onramp, then tried to avoid the parked tractor-trailer rig by braking and steering left, according to the police report.

instead, the passenger side of the truck hit the back of the rig’s trailer, then drifted back about five feet and came to rest facing south.

One of the two pickup occupants was trapped, according to Franklin Fire Company’s Facebook page. Rescuers used Holmatro – Rescue Tools and Extrication Equipment battery powered spreaders, cutters and rams to extricate the trapped man. It took them 17 minutes to free him so waiting EMS personnel could get them to the hospital. Franklins Chief Mark Trace handled the rescue group. Deputy Chief Travis Miller assumed command of the scene.

Franklin County’s emergency dispatch center sent the Franklin’s out on another vehicle crash as they backed into their King Street station following the fatal I-81 crash.

This time, Franklin’s squad and EMS units responded to WCN Drive in Guilford Township for a head-on collision. PSP has not yet released details about that crash.

The Franklin’s Squad arrived and members removed one occupant and immediately began patient care until EMS personnel arrived. A medical evaluation of the patient determined the need for a Life Lion transport to a trauma center. Life Lion 3 landed on WCN Drive.

The second of the two fatalities happened Thursday in Greene Township.

Barry R. Spahr, 63, Chambersburg, died that night while crossing Philadelphia Avenue at North Avenue in Greene Township. A northbound car hit him as he walked east across the highway at 7:37 p.m. in the area of U.S Inn & Apartments, police said. He impact threw him onto the northbound shoulder of the roadway. Police did not provide the name of the driver of the car. The car had minor damage to its front bumper and windshield, according to the police report.

A Life Lion crew took him to Holy Spirit’s trauma unit in Camp Hill, where he died. Franklin Fire Company, Life Lion and the Franklin’s fire police assisted PSP at the scene.