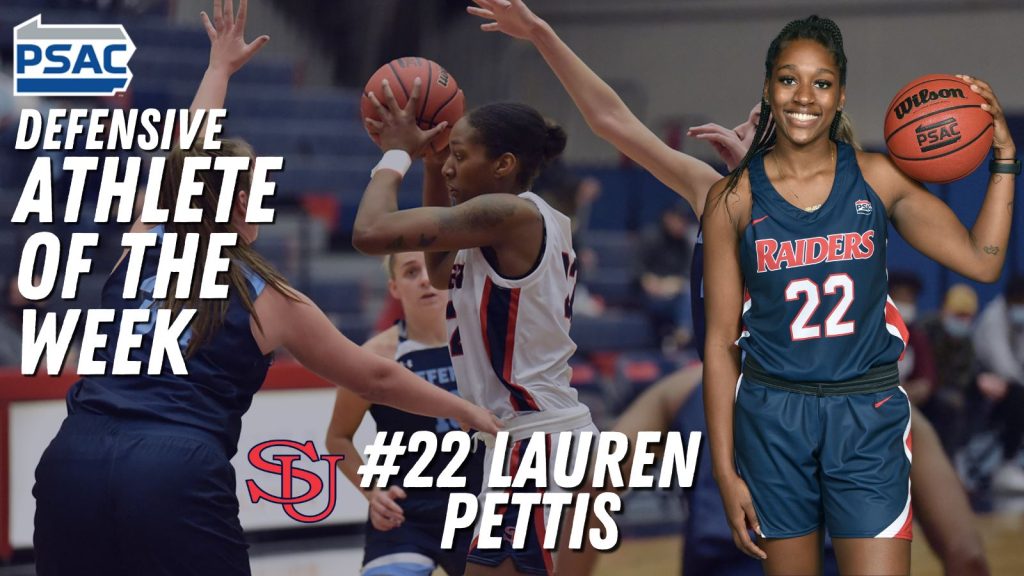 Pettis earned her second weekly award of the season

Pettis totaled 17 defensive rebounds, blocked four shots and had one steal in a pair of victories this past week; the Raiders won 78-69 over Goldey-Beacom and 103-67 over Salem.

From a plus-minus perspective, Pettis matched the team high with a +11 rating against Goldey-Beacom. She posted a +28 rating against Salem, meaning that the Raiders scored 39 points more than they allowed while she was on the floor.

It is Pettis’s second weekly Defensive Athlete award of the season. It is her third career PSAC weekly award; she was the PSAC Eastern Division Freshman of the Week on March 4, 2019.

SU earned both of the PSAC’s weekly awards for the Eastern Division, with sophomore Treasure George (Harrisburg, Pa./Bishop McDevitt) named the Athlete of the Week.

Women’s Basketball Athlete of the Week

George led the Raiders in scoring this week with 36 points and shot 57 percent from the field (11-of-19). She averaged 18.0 points, 6.0 rebounds and 5.0 assists per game as the Raiders posted victories over Goldey-Beacom (78-69) and Salem (103-67). George posted double figures in both games after entering this past week with just one career game scoring in double figures through 33 contests.

In the win over Goldey-Beacom, George posted a career-high 24 points to lead five starters in double figures. George equaled her previous career high in the first quarter by scoring 12 points in the first 10 minutes. She finished 7-of-11 from the field, including a three-pointer, and was 9-of-12 at the free-throw line. She also grabbed six rebounds and had two assists and two steals.

In Sunday’s win over Salem, George posted a career high of eight assists, including six assists in the first quarter, and did not commit a turnover. George scored 12 points and grabbed six rebounds.

From a plus-minus perspective, George posted a +9 rating against Goldey-Beacom; and she posted a team-high +36 rating against Salem, meaning that the Raiders scored 45 points more than they allowed while she was on the floor.

It is the first PSAC weekly award of George’s career. She is the first Raider named the PSAC Eastern Division Athlete of the Week since Ariel Jones was honored on March 2, 2020.

SU earned both of the PSAC’s weekly awards for the Eastern Division, as junior Lauren Pettis (Harrisburg, Pa./Susquehanna Township) was named the Defensive Athlete of the Week.