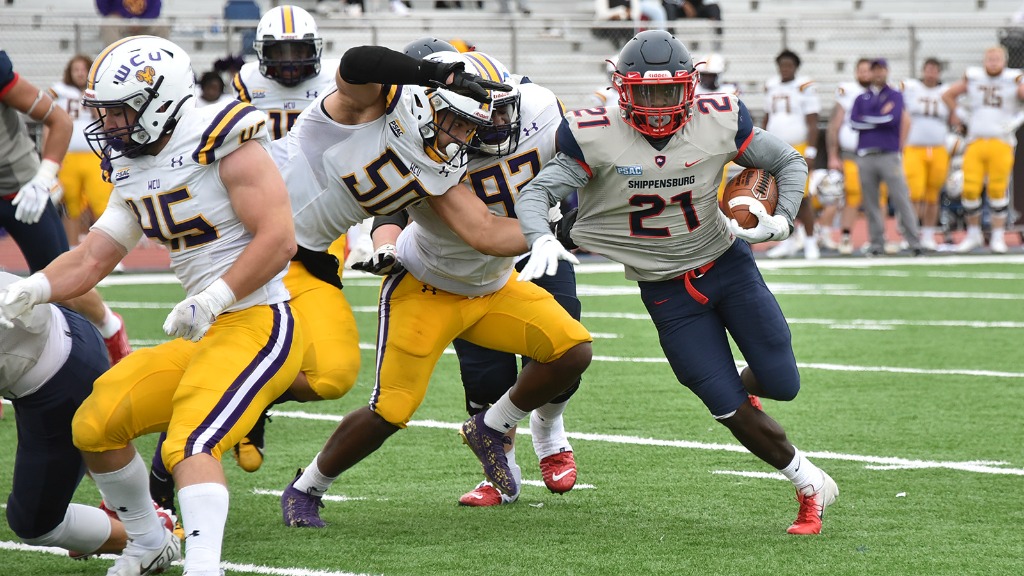 West Chester was defeated by Shippensburg’s Raiders on the football field for the first time in six years Saturday.

The Raiders forced five turnovers and led wire-to-wire as they dispatched West Chester, posting a 34-18 victory over the Golden Rams on a cloudy afternoon at Student Association Field at Seth Grove Stadium.

Shippensburg (5-1, 2-1 PSAC East) scored 17 points off turnovers; 14 of which came off a pair of Golden Ram fumbles in the first quarter. One play into the second quarter, SU had established a 17-3 lead. The visitors got within five points of the lead with 13 minutes remaining before a 71-yard touchdown pass from redshirt-junior Brycen Mussina (Montoursville, Pa./Montoursville (Lafayette)) to graduate Evan Morrill (Hummelstown, Pa./Lower Dauphin (Millersville)) effectively cinched the decision for the Raiders

West Chester (4-2, 2-1) entered Saturday’s game averaging 251 rushing yards per game as the PSAC’s No. 1 rushing offense and the No. 9-ranked rushing attack in the nation. WCU managed just 100 rushing yards against the Raider defense. The Golden Rams had just 239 yards of total offense on the day. It was WCU’s lowest single-game offensive output against Shippensburg in more than 35 years. The Golden Rams used three quarterbacks in the game who combined to complete 11-of-32 passes.

Shippensburg netted 160 rushing yards and ran the ball more than 40 times – once again winning the time of possession battle (31:44 to 28:16). Redshirt-sophomore Bill Williams (Camp Hill, Pa./Camp Hill) ran 15 times for 96 yards, while Khalid Dorsey (York, Pa./York (Howard)) had 19 carries for 74 yards. In the pass game, Mussina was 12-of-21 for 168 yards, two touchdowns and one interception.

With 90 seconds left in the first quarter, WCU inserted quarterback Zach Gilbert. On Gilbert’s only play of the game, he ran for five yards but lost the ball on a hit by Petucci. Junior Dante Witcher (Camden, N.J./Timber Creek) recovered the fumble, and after three Dorsey rushes, Mussina ran a keeper five yards into the end zone to make it 17-3. A 35-yard WCU field goal was the only other scoring of the opening half.

On the opening play of the second half, a blindside blitz by Witcher resulted in a nine-yard sack by Alphee – one of his three TFLs on the day. Two plays later, junior Mike Brewer (Bridgeville, Del./Woodbridge (Wesley)) intercepted a Desman Johnson heave.

Witcher forced another fumble on WCU’s next drive – late in a long run by Phil Poquie – that jarred the ball loose around the 5-yard line. The ball rolled into the end zone, and Poquie was the first to reach it, making the score 17-12. Not a minute later, SU started a drive near midfield and scored in two plays. Williams opened the drive with a 12-yard run and then scampered 39 yards to paydirt to make the score 23-12. Both teams failed two-point conversions after their third-quarter touchdowns.

A 13-play, 65-yard drive that ate up more than seven minutes of clock ended in a fourth-down plunge by Johnson from a yard out early in the fourth quarter. After another failed two-point conversion, the score was 23-18 with 13:02 remaining.

Three plays into its next drive, Mussina found Morrill unmarked in the middle of the field on a 3rd-and-6 from the SU 29-yard line. Morrill caught the ball around his own 40-yard line and proceeded to run untouched down the field – the 71-yard score made it 31-18.

With 5:05 left, a sack-fumble by redshirt-freshman Chisom Ifeanyi (Langhorne, Pa./Neshaminy) on the first play of a WCU drive was recovered by senior Laron Woody (Middletown, Pa./Middletown Area). A 34-yard field goal by freshman Jaxson Montross (Tunkhannock, Pa./Tunkhannock Area) created the final scoring margin with 2:41 left, and the fourth interception of the season by Paul came with 51 seconds left.

Standings and other notes

Montross finished 2-of-3 in field goals; he is now 10-of-15 on field goals through just six games. He is now the ninth kicker in school history to make 10 or more field goals in a season.

The Eastern Division standings are quite interesting after three league games. Kutztown is the only 3-0 team, while Shippensburg, West Chester, Shepherd and East Stroudsburg are all 2-1.

Next week, Shippensburg heads to Kutztown for a 5 p.m. showdown against the Golden Bears.

Notes: Montross’s 10 field goals are the most in a single season since Billy Deane was 12-of-21 in 2016…WCU tailback Ja’Den McKenzie, who entered the day as the PSAC’s No. 4 rusher (85 carries, 417 yards), managed just six rushing yards on seven carries…WCU defensive lineman Michael Gobora, ranked third in the nation in sacks per game, equaled his season average with 1.5 sacks (including a sack-fumble) on Saturday.