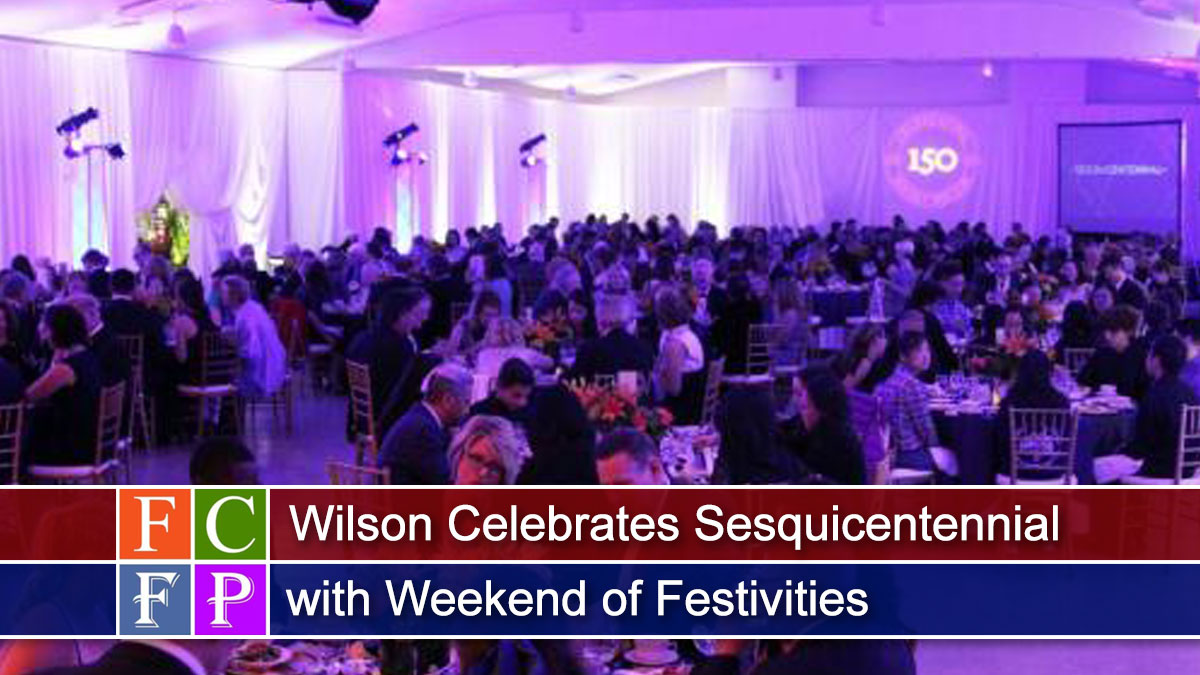 The celebration included a host of homecoming activities, a ribbon-cutting for a new veterinary education center and the naming of an outdoor space for a former president. It also featured a formal gala featuring a performance by a world-renowned children’s orchestra.

Wilson is celebrating its Sesquicentennial, the 150th anniversary of its founding in 1869 and opening in 1870. The 15-month celebration began on the college’s Charter Day.

On Friday the college hosted its annual “BBQ and Brew” under a tent on the quad. Wilson’s Homecoming and Family Weekend also featured a number of exhibits and presentations, as well as building tours and several athletics contests that involved alumni and current students. One game featuring the “Invincibles” vs. the “Defenders” re-enacted an 1895 women’s basketball contest.

Celebrating ‘all that is Wilson’

“It was a grand celebration of all that is Wilson, including our 150th birthday,” said A. Richard Kneedler, Wilson College interim president. “Wilson has a long tradition of helping students find their voice and becoming empowered as leaders. This weekend was about celebrating how Wilson makes a difference in the lives of each and every student, faculty and staff member, and alumna and alumnus. There is something truly special about this fine institution.”

Barbara K. Mistick, who served as Wilson’s president from 2011 through September of this year, also returned for the gala. Earlier in the day the academic quad she envisioned and directed during her tenure was renamed the Mistick Quad in her honor.

“It was gratifying to recognize one of Wilson’s most dynamic and impactful presidents in recent memory, Barbara Mistick,” said Dr. Barbara Tenney, a Wilson alumna and president of the Board of Trustees. “Overall, the weekend reflected a renewed vigor and enthusiasm at a college on the rise. I want to personally thank everyone who made our celebration such a great success.”

The Children’s Orchestra Society sent an 18-member Elite String Ensemble (ESE) to provide musical entertainment for the evening. COS is a New York City-based group of orchestras, chamber groups and ensembles for musically talented children and teens.

After dinner, the ensemble performed several selections, including the 3rd Movement of Bach’s “Brandenburg Concerto No. 3.”

COS Executive Director Yeou-Cheng Ma attended with her husband, Michael Dadap, the orchestra’s artistic director. her whose father, Dr. Hiao Tsiun Ma, founded the nonprofit organization for musically talented children and teens in 1962.

Like her brother, acclaimed cellist Yo-Yo Ma, Dr. Yeou-Cheng Ma was herself a child prodigy on the violin and later became a pediatrician. Wilson honored her during the gala with an honorary Doctor of Humanities. Ma and her husband, a guitarist, also performed together.

Another highlight of the weekend was a ribbon-cutting ceremony Saturday, officially marking the opening of Wilson’s new $3 million veterinary education center.

Fulton contributed $975,000 to the project, including a $500,000 lead gift in 2016. She is a Wilson trustee emerita, businesswoman and philanthropist from the Class of 1961. She took part in the ribbon-cutting, as did Margaret Hamilton Duprey, a Wilson Trustee who contributed $1 million to the new veterinary center.

The interior and programmatic activity in the center will be known as The Margaret Hamilton Duprey Center for Veterinary Excellence. A lifelong horsewoman, Duprey contributed $500,000 to Wilson in 2015 to establish an innovative home healthcare nursing program for horses called Equi-Assist®.

The 9,000-square-foot veterinary center, which has been open since the start of classes in August, replaces the smaller, outdated Helen M. Beach ’24 veterinary facility.

The veterinary center is a hub for students in the college’s VMT program. That program is the only four-year bachelor’s degree program of its kind in Pennsylvania and only one of 22 such programs in the nation. After nursing, VMT is the most popular major at Wilson.

This year, 69 students have declared VMT as their major and another 95 students intend to major in it. Wilson also has 45 pre-veterinary students.

Other officials who participated in the ribbon-cutting ceremony include Wilson Interim President A. Richard Kneedler, Board of Trustees Chair Barbara Tenney, Trustee James Orsini, Vice President for Academic Affairs Elissa Heil and Professor and Director of VMT Freya Burnett.

Tours, talks and a family dinner

Families of Wilson students enjoyed a number of events during the weekend, including tours, talks and a family dinner Saturday evening in the dining hall.

A service on Sunday at Rocky Spring Presbyterian Church ended the celebration. Wilson namesake Sarah Wilson and her family attended the historic church for many years in the 1800s. The service was officiated by the Rev. Derek Wadlington, Wilson’s Helen Carnell Eden Chaplain.

Music review: This ‘blue’ is complex

Ethan Larsh - April 27, 2020 0
In songwriting, the word “blue” can almost be considered a cliche. It rhymes well, and can help set the melancholy tone of...