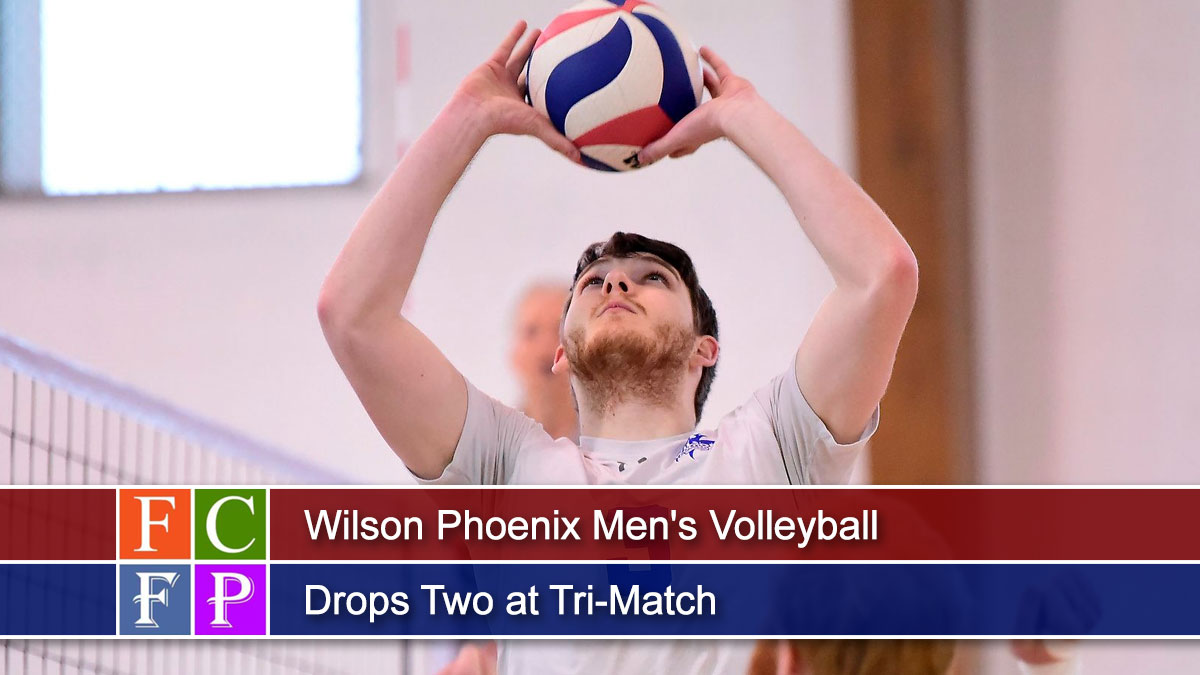 The Wilson men’s volleyball team opened their season on the road this morning, traveling to Lancaster Bible College for a tri-match against the Chargers of Lancaster Bible and the Bears of SUNY Potsdam. Wilson was defeated in both of their contests, falling in three sets in each.

The Phoenix fell behind early in the first set 10-4 as the Chargers later moved out to an 18-7 lead. Lancaster Bible went on to win the first set 25-11 over the Phoenix. Wilson had 5 kills in the first set on 14 attempts. Dan Perry (London, England, Okanagan Secondary) led the way with 3 kills.

Lancaster Bible jumped out to an 11-1 lead in the second set before the Phoenix took a timeout. The Phoenix came out of the timeout scoring back-to-back points before the Chargers extended their lead to 15-5. They would later take the set 25-11. Wilson struck for just three kills in the second set with Ian Firestone (York, Pa., York Suburban) registering two of the three.

Wilson started the third set by taking a 3-2 lead with kills from Ian Firestone and Dan Perry. The Chargers didn’t trail for long, however, as they stormed ahead 15-6. Wilson cut the deficit to five before Lancaster Bible scored three straight points to take an 18-10 lead. The Chargers went on to take the third set 25-13 to win the match, 3-0.

Wilson took on the Bears of SUNY Potsdam in the second match of the day. After SUNY Potsdam took an 8-2 lead, the Phoenix stormed back and pulled within striking distance. Oliver Perry started the Wilson rally with a kill. That was followed by three straight kills from Ian Firestone that brought the Phoenix within two points. The Bears rallied back and take the first set by a score of 25-16.

In the second set, SUNY Potsdam jumped out to an early 5-1 lead. Wilson started to chip away, battling back until they were within two points, 11-9. Senior Joshua Harvey (Perth, Australia, La Salle College) helped lead the offensive attack. Andrew Hetzer and Ian Firestone spearheaded the defense with a huge block. After the Bears pulled ahead, Wilson again started a rally and pulled within one point. This time Oliver Perry led the charge with two kills while Andrew Hetzer added one. The Phoenix continued to battle but could not pull off the comeback. They were defeated in the second set by a score of 25-21.

SUNY Potsdam hopped on a 10-3 run before Wilson called a timeout. The Bears continued to rally and eventually stretched their lead to 18-5 before the Phoenix called their final timeout. After the break in play, Wilson came out hot and started a 12-5 run that took the score to 21-17 and forced SUNY Potsdam to take a timeout of their own. Wilson could not complete the rally as they would be defeated in this set by a score of 25-20.

The Phoenix travel to take on Pratt Institute on Saturday, February 15, at noon.