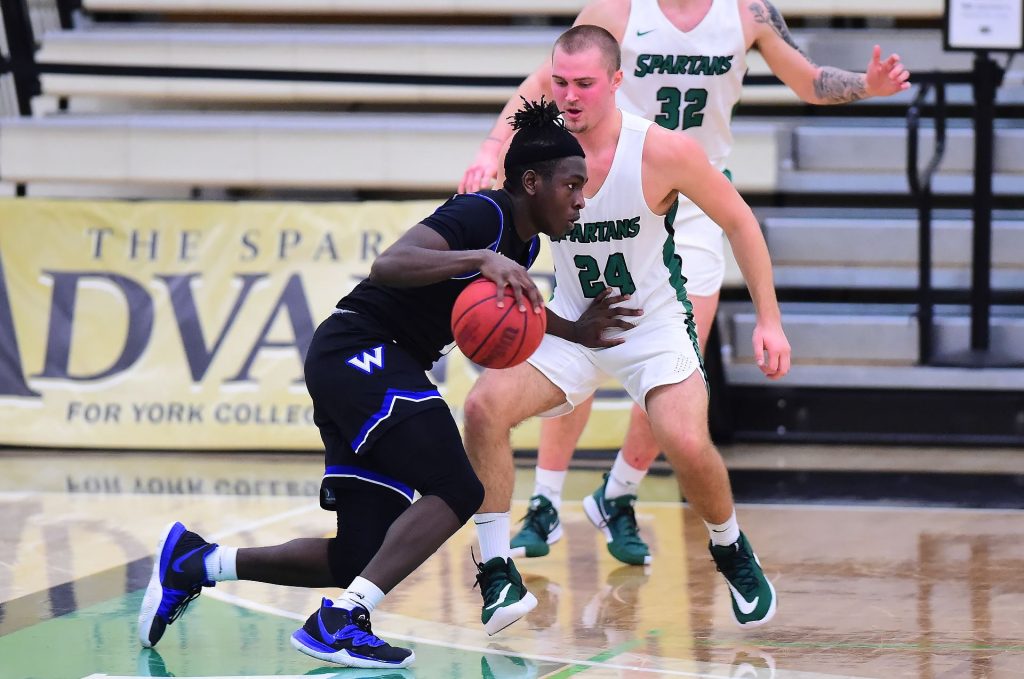 Wilson’s men’s basketball was back Saturday, after missing an entire season due to the COVID-19 pandemic. The first game of the 2021-22 season was the MMI Tip-Off Classic hosted by Hood College. The Phoenix (0-1) battled the host Blazers (1-0) and fell by a final score of 77-64.

The Phoenix opened the game with a ton of energy, playing at a fast pace; but knocking the rust off early was a challenge. In the opening seven minutes, the team was cold from the floor. They created some turnovers while also turning the ball over, and got into a little bit of foul trouble. The lone bucket for the Phoenix during that stretch came on a layup by senior Adrian Thomas (Germantown, MD., Northwest HS) as the Blazers jumped out to a 13-2 advantage. After another bucket by Thomas made the score 13-4, the Phoenix started to settle in and find a rhythm.

The Phoenix showed how quickly they can light up the scoreboard with their next 15 points from behind the arc. Junior Darryl Garib (Dallas, TX., Forest Park) started off the barrage, classmate Kennedy Birdwell (Temple Hills, MD., Fairmont Heights) followed with his own three, and freshman Darren Green (Silver Spring, MD., Springbrook HS) drained back-to-back three’s to pull the Phoenix within 6 points at 22-16.

Junior Warrick Godwin Jr. (Largo, MD, ) recorded the last of 5 consecutive three-pointers to make it a 5 point game. With under five minutes to play in the half, the Phoenix got a fast-break and Green flushed it with authority. A few seconds later Godwin Jr. finished with a layup to tie the game at 25-25. The Blazers hit a couple of three’s of their own in the final two minutes, carrying a 35-29 edge into halftime.

After watching the Blazers push their lead to 8 points early in the second half, the Phoenix got a three from junior Jordan Miles (Waldorf, MD., Westlake). A layup on the other end by the Blazers pushed their lead back to 7 points. The Phoenix answered with a three by Garib and a pair of free throws by junior Antonio Bussey (Aiken, SC, ) to make it a 2 point game at 41-39. Over the next five minutes, the Blazers used an 11-2 run to get some separation from the Phoenix. A three-ball by Birdwell slowed the run and pull the Phoenix within 8 points at 52-44.

However, the Blazers went on a 8-2 run to extend their lead to 60-46 with under seven minutes to play. Late in the half, the Phoenix mounted one last charge with a 7-0 run capped off by a jam by Bussey to make it a 69-62 game. The team would get no closer as Blazers would close out the game with a 77-64 victory.

The Blazers out-shot the Phoenix from the floor by a 42.1% to 37.7% margin; and they shot 33 free throws compared to 23 for the Phoenix. While the Phoenix controlled the glass by a 41-35 margin, it was the Blazers that doubled up the Phoenix in the paint with a 32-16 edge.

Wilson’s men’s hoops has a quick turnaround tomorrow, competing in the tourney’s consolation game against Carnegie Mellon University. Tip-off is at noon.