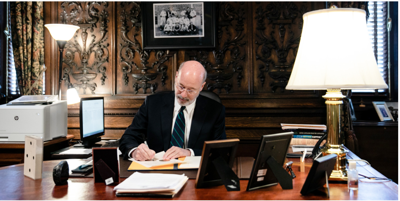 The Center Square – Pennsylvania Governor Tom Wolf said Friday he will veto a resolution to end the state’s disaster declaration if it gets to his desk – though he empathizes with the sentiment behind it.

“I understand it,” he said. “It’s not going to help in terms of getting people to actually feel comfortable going out.”

The House voted 117-85 on Thursday to send a resolution to the Senate to end the Wolf’s Mar. 6 disaster declaration giving him broad, sweeping powers to shut down businesses and take enforcement action against those who don’t comply.

Eight Democrats broke across party lines to support the measure, recognized as a quick-fire way to lift restrictions on economic activity as the pandemic wanes across the state.

Wolf told reporters Friday that he gets pressure from everywhere, himself included, to reopen the state faster than his phased plan allows. On June 5, 16 more counties will progress to the green stage. That allows restaurants, gyms, salons and bars to reopen at limited capacity. Philadelphia and surrounding counties will also emerge from the red stage of mitigation into the less-restrictive yellow stage.

“Everyone wants to get back to normal,” Wolf said. “I recognize the frustration. This is not a matter of me waving a magic wand or flipping a switch and everything is open. It’s a matter of making people feel comfortable going out in this post-infectious disease world.”

The current disaster declaration will expire next week, however, lawmakers are not set to return to session until June 8. It’s unclear if Wolf will extend the order.

March 26, 2019
Thanks for subscribing! Please check your email for further instructions.