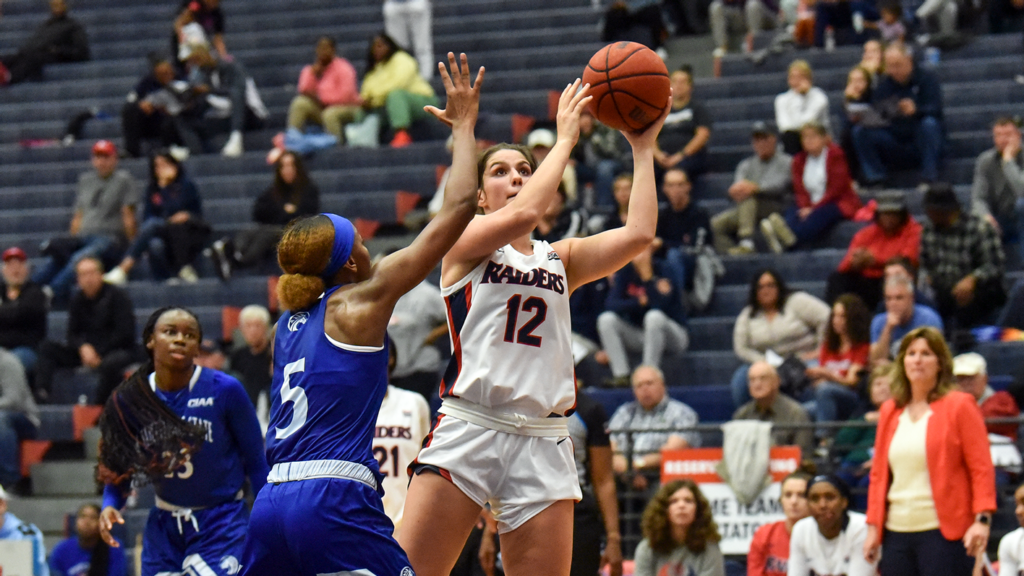 Senior Ariel Jones (Lebanon, Pa./Cedar Crest) scored a game-high 21 points Friday night as she returned to action to lead the Shippensburg University women’s basketball team to a season-opening win against Fayetteville State, 65-42, in the Conference Challenge at Heiges Field House.

Shippensburg (1-0) scored over 15 points in each quarter and held Fayetteville State (0-1) to single digits in each of the first two quarters. The Raiders used an early 14-0 run in the first quarter and held the Broncos scoreless for more than eight minutes. In the second quarter, SU dominated again and held FSU to only six points, including a three-minute scoring drought.

At the half, Shippensburg led 33-11 with Jones already putting up 14 points and three rebounds, while fellow senior Lauren Pettis (Harrisburg, Pa./Susquehanna Township) had six rebounds. Sophomore Abbie Miller (Camp Hill, Pa./Cumberland Valley) was critical on the defensive end as she drew five offensive fouls on charges, resulting in a few Fayetteville State players being in foul trouble. SU scored 16 points off turnovers, 16 points in the paint, and 10 second-chance points in the first half.

In the third quarter, Fayetteville rallied back and outscored Shippensburg 20-16 and shot 44.4 percent, their best shooting quarter of the night. FSU was able to score 11 points off seven turnovers and scored 16 points in the paint. In the last 10 minutes of the game, the Raiders had a 14-4 scoring advantage in the paint and only had two turnovers.

Jones finished with seven rebounds, a block, two steals, an assist and drew six fouls. Miller was one point and rebound shy of her first double-double with nine points and nine rebounds to go along with two steals, two assists and eight fouls drawn. Pettis led the team with a team-high three blocks and added eight rebounds, seven points and an assist.