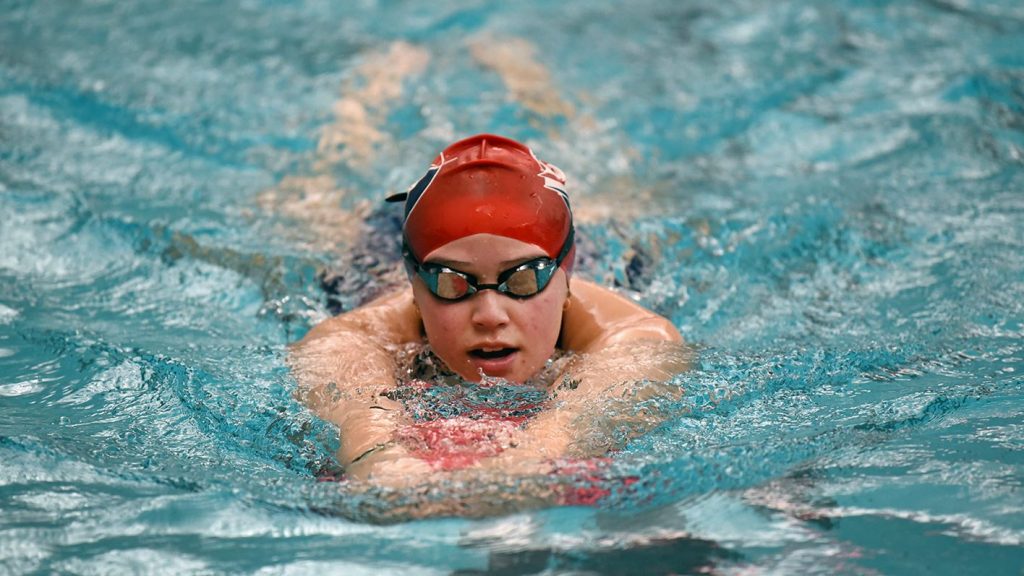 The Shippensburg University women’s swimming team has returned from winter break ready to seize the opportunity to complete a 2020-21 season.

Instead of its traditional six-month saunter, the Raiders will have a three-month ramble to gear up for the 2021 Pennsylvania State Athletic Conference (PSAC) Championships.

“It’s nice to see them training together, in the weight room together, and the comradery,” head coach Tim Verge said. “Every athlete likes to do their thing; and I feel lucky that we were able to have a season and move forward with it.”

A lot of people at Shippensburg are working really hard, spending a lot of time to make this happen.

“We are very grateful for that,” Verge said.

SU swimmers didn’t have a fall season, save for some very light swimming and a few weeks of strength work. Now, the team has the chance to practice. The COVID-19 pandemic has forced the team to adapt, however; especially in a physical sense with distancing and mitigation efforts around the pool.

“It’s been a bit of a challenge not being able to do some of the longer stuff in practice, because we feel like we’re starting to run up on each other a bit quicker,” Verge said. “If we had a couple more lanes and space that would be great, but by being able to split practice, it works out okay.”

The schedule and the daily approach is not as traditional as it’s been in the past. Perspective is certainly not lost on the group, however.

“As far as the actual process, I would say we’re fortunate because while we mask and distance during our strength work before practice; we’re not limited by having to wear the mask when we’re in the water,” Verge said. “That’s provided us a little bit more normalcy than what some other people have, so we’re pretty thankful for that.”

The Raiders have asserted themselves well this winter. Sessions over the first couple of weeks have already provided some positive results. The team’s eight freshmen have stepped right in and formed a strong complement to the 17 returning swimmers.

That said, there is a lot of energy in the program. SU wants to make an impact at the conference championships, and the path to success starts each day in practice.

“They’re engaged,” Verge said. “They realize they don’t have a lot of time, so they’re really on top of things. It’s easier to keep our excitement level and high-training level going rather than if we had come back in December.”

From a competition standpoint, Shippensburg will hold virtual meets at Donald N. Miller Pool. Student athletes will swim a schedule of events established weekly by the conference that is uniform across the league. Each school is given a time window to conduct a competition, and then a deadline to submit results. Without officials present at these meets, the sole purpose of these results is to establish seed times for the PSAC Championships – which will be conducted as timed finals without prelims.

The first of these meets takes place Saturday at 1 p.m., and Raider seniors Neena Gollub, Mari Reott, Erika Rundquist and Kayla Sudbrink  will be honored beforehand.

“I get a sense of real excitement from the returners,” Verge said. “You can definitely see it in the pool too. They’re really eager to get out there on Saturday.”

The virtual meets will be “a barometer for where we’re at,” according to Verge. It will lead to adaptations in practice as the team ramps up its training even further in April.

A normal season for the swimmers is incredibly demanding. A season in the COVID-19 landscape is even more challenging. Verge praised his team’s ability to roll with the punches.

“They’re resilient,” Verge said. “They’ve really handled the challenge of everything well. There’s high character among this group, and great confidence. They’re pushing each other.”

Each swimmer has established a mission to be successful at the end of the season. United in that goal, the Raiders hope that it will translate into team success in late April.

“Enjoy the opportunity we have, and have fun with it,” Verge said. “You always want to try to score well at the conference meet, and we’re going to go in, race hard, and want to do well.”