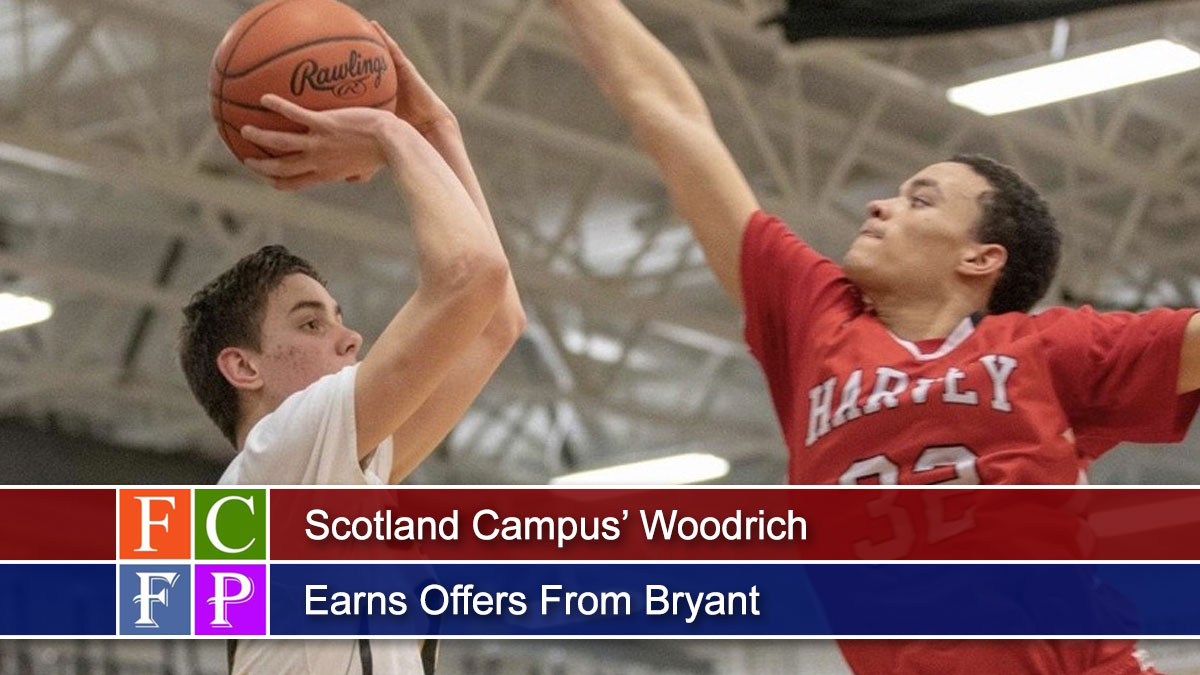 On the massive stage that is the prestigious Prep National Showcase at Albertus Magnus College (CT), Scotland Campus (PA) Class of 2020 prospect Jayson Woodrich fled obscurity and morphed into the mad flamethrower.

The 6’7” sharpshooter buried an event-best 13 three-pointers in two games, garnering offers from Bryant University and Fairfield in the process. Vermont, Kent State, Wofford, and a barrage of other programs are beginning to express interest in Woodrich, an Ohio native.

The 6’7” Woodrich scored 31 points, spearheading the Knights to a win over Vermont Academy on the event’s opening night. He did it on the strength of eight treys. During a pulsating 91-88 loss to national power Putnam Science (CT), Woodrich poured in 23 points  (5-for-12 3FG).

Beyond a deft and consistent outside touch, Woodrich displayed a turnaround jumper, handle, and an ability to manufacture points around the rim and at the free throw line. He made multiple shots from way beyond the college 3-point line.

“Jayson stepped up this past weekend not just in his shooting ability but his competitiveness, his rebounding, and playing off the bounce,” explained Scotland Campus head coach Chris Chaney.

“He will continue to improve because of his desire to work and will use his length and toughness to his advantage.”

Scotland Campus’ 6-foot-9, 225-pound behemoth Abou Ousmane turned in an efficient account of himself. Playing against his former Putnam Science team, the Brooklyn native finished with 16 points  (8-for-15 FG) and six boards before fouling out with less than five minutes remaining.

Ousmane’s ability to bulldoze defenders inside and score with his back to the rim, a la the quintessential 1990s NBA Center, have been noteworthy. He’s added a short range jumper and feathery baby hook from either hand to his arsenal.

Putnam Science’s Marty Silvera has transformed his body and scoring aptitude. His performance in the event showed this.

Solidifying his status as a poised shot-maker and counter-puncher, Silvera scored 18 points (6-for-12 FG, 3-6 3FG) in Putnam’s victory over Scotland. His play throughout the event should certainly ramp up his recruitment.

And while Silvera and Putnam’s cadre of hot shooting guards spurred a rollicking second half comeback, battle-tested Texas A&M bound guard Hassan Diarra hit the toughest,  most pressurized shots of the night.

With Buzz Williams on hand to see his prized recruit, Diarra finished with 16 points

Baseball Scores 17 to Sweep Doubleheader with New Kensington on Saturday

SHIP U. Football Drops Road Game at No. 17 Kutztown