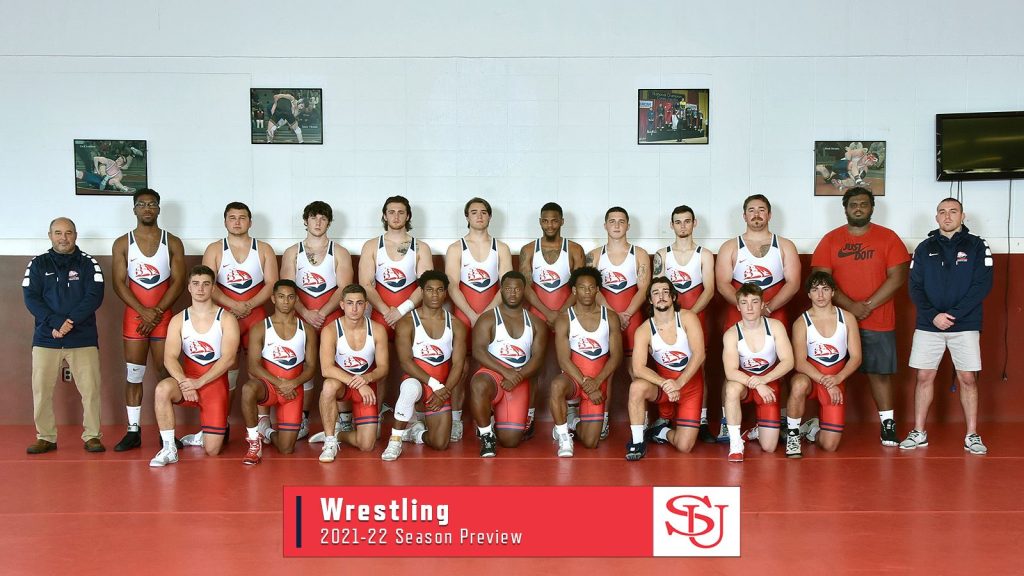 SU’s wrestling program returns to the mat for the 2021-22 season, and 11 Raiders wrestlers are returning from the end of the 2019-20 campaign.

The Raiders wrestling team is ready to return to competition after 18 months away due to the COVID-19 pandemic.

“I know everybody’s excited to get back on the mat and actually competing again,” heavyweight Danny Scheib (Hegins, Pa./Tri-Valley) said. “Practicing and lifting for two years straight without having anything to reward yourself with, it’s pretty tough to keep yourself motivated and keep yourself in the groove of working out and staying in somewhat shape when you can’t compete or do anything else.”

The long layoff from COVID was hard enough for most sports, but especially so for wrestling. Not only is it a physically demanding sport, but successful practice involves other people. Sparring alone is not an ideal scenario.

“It was hard to stay in shape throughout all of it,” 184-pounder Drake Brenize (Newburg, Pa./Chambersburg Area) said. “It’s hard when you’re at home to stay motivated to work out without having the rest of the team there with you. Coming back, it was a matter of getting in shape. You could tell that the team had some work to do, so that was probably the hardest part for us.”

Preseason goal: Getting back into wrestling shape

Getting back into wrestling shape has been the primary goal of the preseason. The physical demand has been great, but practice has also been an opportunity to return to technique and refine one’s craft.

“You can run and lift and do all that when you’re not competing; but actually being in wrestling shape is a completely different animal,” Scheib said. “There’s a lot of bumps and bruises that come with wrestling, and that’s been tough for a lot of the guys early on in the preseason.”

Eleven wrestlers are back from the end of the 2019-20 season. Among the returners is 2020 national qualifier redshirt-senior DeAndre Reed (Baltimore, Md./Digital Harbor (West Liberty)), who placed third at 141 pounds at the 2020 Super Region 1 Championships but was unable to compete at the national championships due to the tournament being canceled. Reed, Scheib, Brenize and Matt Milbrand (Bloomsburg, Pa./Bloomsburg Area) will serve as captains.

“We have a lot of young guys; but the good thing about that is the older class is also the second-biggest class,” Brenize said. “We have several seniors and juniors which really helps to keep everyone motivated.”

A schedule and a plan

Brenize said the team has a schedule and a plan.

“We have guys who have been in matches, in regionals, and in nationals,” he said. “It really helps to have that experience in our room.”

With such a wide-ranging group of athletes, the 2021-22 preseason has proved doubly important.

“Early on we had a lot of trials that we had to get through as a team; but you can already see that we’re bonding more as a team,” Scheib said. “I feel like we’re growing a lot, quickly, with a lot of young guys.”

From a schedule standpoint, the first month of the season includes three dual meets and two open invitationals. The Pennsylvania State Athletic Conference (PSAC) Division II dual meet schedule begins Dec. 5 at Millersville, but all of the other remaining league meets occur in the second semester. Saturday, Jan. 29 and Friday, Feb. 11 are SU’s only home dates.

Cancellation of the 2000 season at the nationals two years age makes the upcoming season especially important to Reed.

Shippensburg opens tomorrow at 7 p.m. with a home dual meet against Elizabethtown at Heiges Field House.