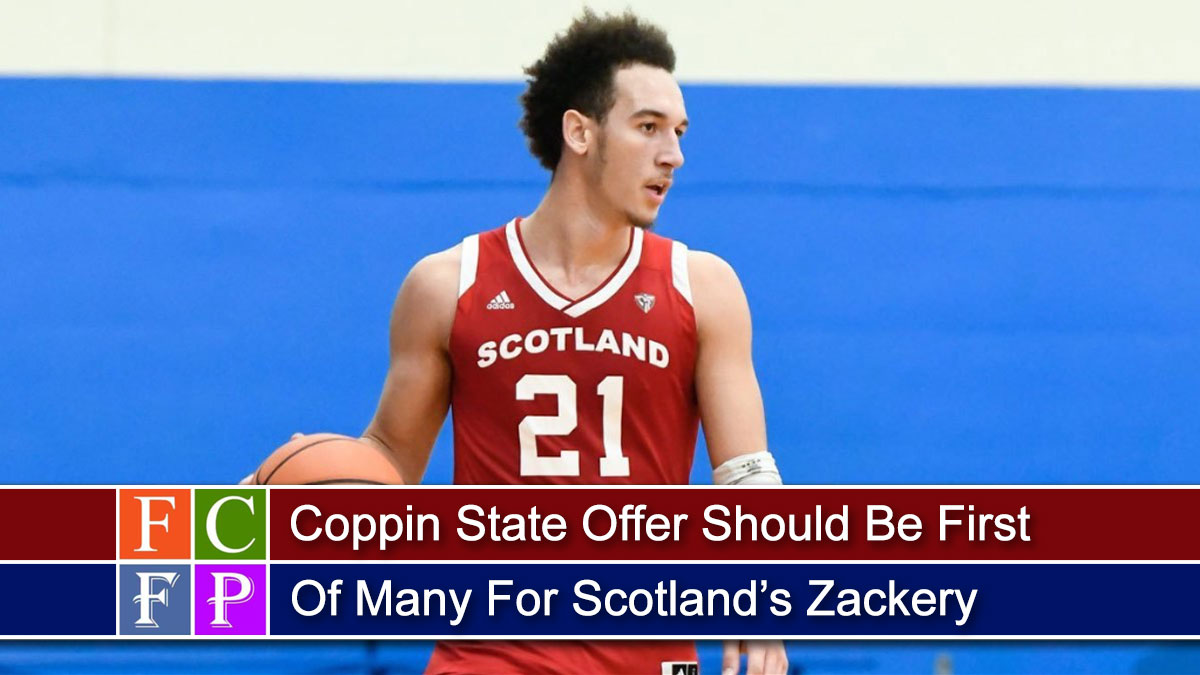 Scotland Campus Sports’ 6-foot-3 guard Jaeden Zackery has picked up a full Division-I offer from Coppin State. A tough 6-foot-3 guard with a deft passing ability and a knack for scoring the ball at three levels, the Class of 2020 Zackery has erupted as one of the more unsung guards on the prep circuit.

After leading the Knights in scoring and assists on multiple occasions, while also keeping his fingerprints all across the stat sheet with consistent high totals in steals and rebounds, Zackery’s toughness and reliability garnered the attention of Holy Cross, Marist, NAVY, and several other programs who appeared highly interested.

Finally, Coppin State presented the Wisconsin native with his first ever Division-I scholarship offer this past week. Zackery, who scored 21 points during a recent 101-63 trouncing of S4G Academy (NC) and scored 14 points to go with seven assists during one of the team’s two losses (against national superpower Putnam Science back in November), could likely see this as a portent of things to come.

Once that first offer drops, a player of Zackery’s caliber should expect a bevy of others to follow. Especially given the way he’s registered his presence this season as a hard-driving, high-IQ point guard with a college-ready body and a knack for hitting highly pressurized shots.

“To get that first (offer), is like a dream come true,” said Zackery, who holds a 3.8 Grade Point Average as well. “I’ve always wanted this and have been working extremely hard for it. So, for it to finally happen is really a joy.”

Coppin State is coached by Juan Dixon, the legendary Maryland guard who helped catapult the Terps to a 2002 national championship as an undersized guard. A gritty little guard constantly forced to guard bigger players, DIxon dealt with his fair share of doubters and detractors throughout his memorable career. Dixon would prolong his career in the NBA, where he authored a seven year career playing for teams such as the Washington Wizards and the Portland Trail Blazers.

“Coach DIxon and I discussed how his program is built to develop players and he spoke with me on his background with basketball. He also got into details as far a the different strategies Coppin State has on offense and defense. Coach explained what type of guard he saw me as and how my style really fit perfectly with the scheme they employ and that I would develop a lot being there.”

Zackery’s career at Westosha Central High School in Wisconsin sizzled. He averaged 21 points, five assists, and shot the ball at a scalding 64 percent from the floor (en route to being named WI Point Guard of the Year). But he felt he slipped through the cracks, recruiting wise.

Pursuing a Post-Grad Year Pays Off

“I thought that pursuing a post-graduate year would be the best path for me to take to garner more notice and develop more in the court.”

Previous Scotland guards such as Koreem Ozier (who is from Zackery’s native Wisconsin area) and Dequarius Nicholas entered their post grad year with a similar hunger for more. The 6-foot-2 Ozier now stars as a sophomore at Sacred Heart and the rugged 6-foot-2 Nicholas has had several 20+ point games as a freshman at Southeast Missouri State University.

“JZ has really developed into an all around player and has the toughness physically and mentally as the type of player we have at Scotland Campus,” said Knights head coach and three time National Coach of the Year Chris Chaney.

“He is going to keep getting better and his upside, because of his work ethic and other intangibles, will ultimately get him ready to play right away at the next level.”