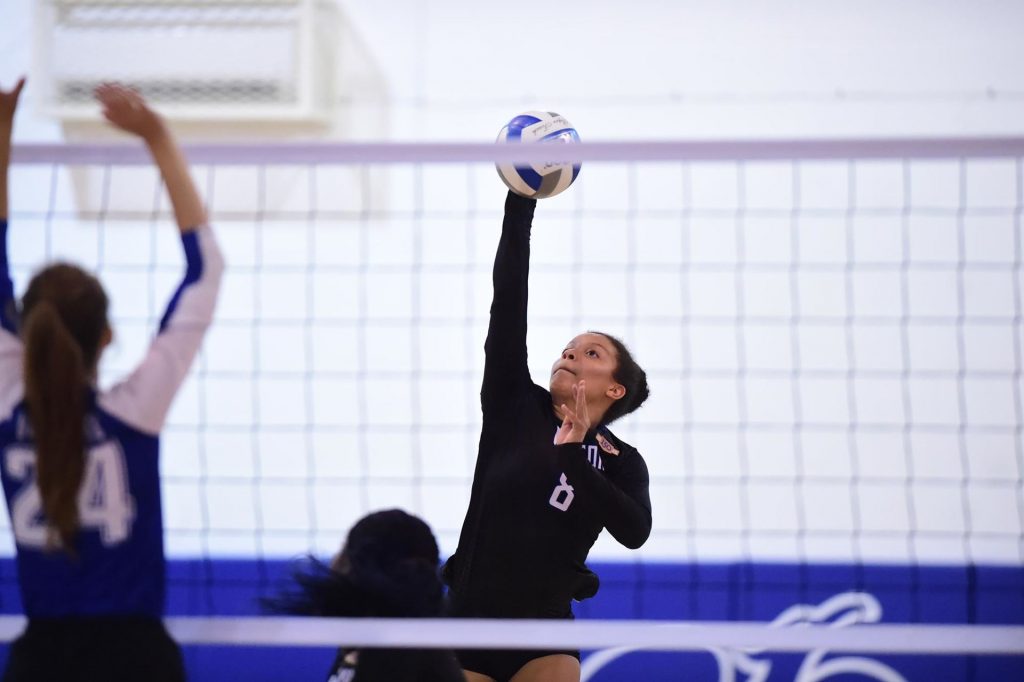 The Phoenix grabbed an early 5-2 lead in the first set with a kill by senior Tia Jones (Springfield, VA., Lake Braddock) closing out the opening run. After the Defenders took a 6-5 lead, the Phoenix ran off 9 of the next 10 points, highlighted by a pair of service aces by freshman Deah Menedis (Reisterstown, MD, Franklin High), for a 14-7 edge.

Later in the set, 8 straight points by the Phoenix, finished off with three kills by Jones, junior Anika Eigen-Zucchi (Washington, D.C., St. Johns College High School) and freshman Sage Lague (Fairplay, MD, Goretti) pushed the Phoenix to a 22-8 lead as they closed out the first set 25-9.

In the second set, kills by Jones, senior Tioleaoauli Posiulai (Waipahu, HI., University Laboratory School) and Lague staked the Phoenix to a 4-0 lead. While the Defenders kept it close for the first 10 points, the Phoenix rattled off 6 straight to extend their lead to 13-3. After a short rally by the Defenders made it a 13-8 match, another kill by Eigen-Zucchi and an ace by Menedis sparked a 6 out of 7 point run for the Phoenix to make the score 18-9. A pair of aces by Jones and an ace by Posiulai closed out a 25-13 win for the Phoenix.

The third set was back and forth in the early going as the Phoenix eased out to a 14-10 advantage, however 4 aces by Jones and a kill by Eigen-Zucchi, with an assist from junior Elizabeth Vuxta (Elizabethtown, PA., Elizabethtown), gave the team a lead they would not surrender. The Phoenix closed out the third set 25-12 and the match 3-0.

The Phoenix had 30 kills on 99 attempts against 13 errors for a .172 attacking percentage. Jones led the Phoenix attack with 9 kills and 7 aces, while Lague added 8 kills. Vuxta had a match high 19 assists and added 7 digs. Eigen-Zucchi tallied 8 kills and a match high 8 digs.

Wilson will host Notre Dame of Maryland on Wednesday at 7:00 p.m. in a CSAC match-up.