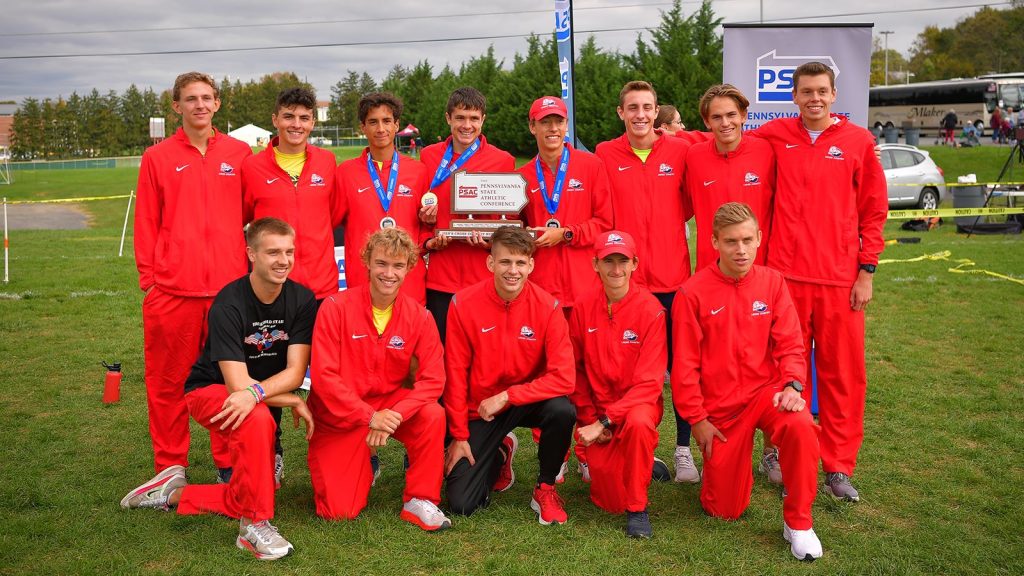 The Raiders placed second in the team standings at the 2021 PSAC Championships amidst pleasant fall conditions at Kutztown University.

Macknair completed his 8K in 25:47, posting a three-second victory over Edinboro’s Ward Ries. It is the third consecutive All-PSAC First Team classification for Macknair; who finished fifth in March and 11th as a freshman in 2019.

Only one other time in history did a Shippensburg runner claim a PSAC men’s individual title. Forty-one years ago, Raider runners Gregg Sanders and Gary Bicking each crossed the finish line side by side. The finish technically gave the pair first place at the 1980 PSAC Championships. A finish line official at the meet declared that there couldn’t be a tie, so he awarded Sanders first place.

In Friday’s race, Shippensburg scored 71 points, second only to race champion Edinboro (32 points). It is the 19th time in school history that the Raiders have posted a second-place finish at the conference meet; and the third time in the last four years.

Six Raiders achieved All-PSAC finishes – the most for the Raiders in four years. Sophomore Hayden Hunt (Shippensburg, Pa./Shippensburg Area) continued his excellent season with a fifth-place finish in 26:03. The finish gave him back-to-back All-PSAC First Team classifications (Hunt was 12th in March).

The difference in Friday’s race was the Fighting Scot lead pack placing 2-3-4-8-15; as the four Edinboro runners in the Top 8 proved insurmountable.

Freshman Mitchell Brett (Lenhartsville, Pa./Kutztown) was just one spot shy of an All-PSAC finish, delivering a solid time of 27:17 as SU’s No. 7 runner in 31st place overall.