Shippensburg University’s Emily Hangen (Reading, Pa./Exeter Township) is a pick for the 2020-21 Division II Academic All-District 2 ® Volleyball Team. The award recognizes the nation’s top student-athletes for their combined performances on the court and in the classroom.

Hangen is a senior majoring in special education and early childhood education who possesses a 3.79 cumulative grade-point average (GPA). She is a starting setter for the Raiders.

She is the first SU volleyball player to earn Academic All-District ® honors since Jill Edwards in 2013-14.

Hangen has made 94 career starts and ranks fourth in school history with 3,782 career assists. Her career-high 1,401 assists in 2019 were the second-most in NCAA Division II.

Hangen has also totaled 199 kills, 91 aces, 129 blocks and 1,071 digs over the course of 345 career sets. During her Raider tenure, SU has posted a 72-27 record and qualified for the NCAA Tournament each season.

The College Sports Information Directors of America (CoSIDA) selects the Academic All-District ® Team. They used career statistics instead of season statistics for the 2020-21 team as a result of the COVID-19 pandemic.

Shippensburg University sports: Osanitsch is Coach of the Year 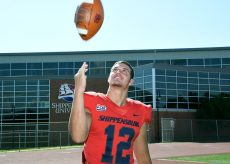