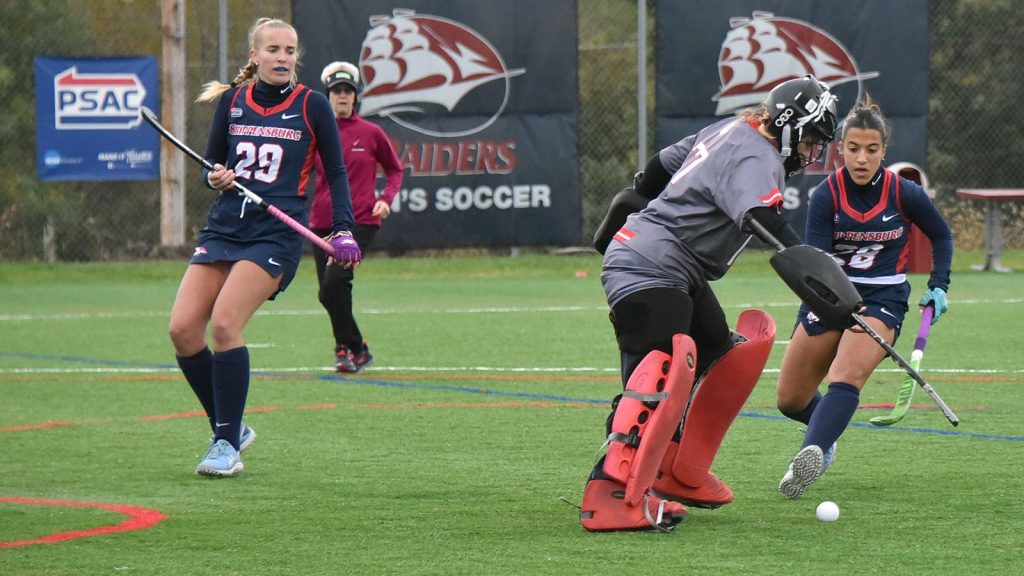 Shippensburg (15-0) got four goals from Petrantonio, who joins Bloomsburg’s Jamie Vanartsdalen (120) and Stonehill’s Kacie Smith (109) as the only NCAA Division II players with 100 or more career goals. Petrantonio now has 33 goals this season, putting her past the previous school record of 30 achieved by Ashley Watt in 2005.

Eleven different Raiders finished the game with at least one point. Senior Jenna Sluymer (Nieuw-Vennep, The Netherlands/Haarlemmermeer Lyceum, Hoofddorp) opened the game with a natural hat trick. It is her fourth career hat trick and extended her single-season career high to 20 goals.

Freshman Tess Jedeloo (Amsterdam, The Netherlands/Hervormd Lyceum Zuid) equaled her season total with two goals on Tuesday, while senior Adrienne McGarrigle (Lititz, Pa./Warwick) had a goal and an assist.

SU finished with 35-1 advantage in shots on goal and a 20-1 advantage in corners. Freshman Lindsay Tripodo (Gibbsboro, N.J./Eastern Regional) made one save and recorded her sixth solo shutout of the season.

SU led 2-0 after the first quarter, as Sluymer slammed home a rebound in the first two minutes of the game and later scored on a penalty-corner pass by graduate Tori Albright (Landisburg, Pa./West Perry (UConn).

The Raiders continued the offensive momentum into the start of the second quarter and led 6-0 at halftime. Sluymer tipped in a pass from McGarrigle just more than a minute into the frame to achieve her second hat trick of the season. McGarrigle scored off a rebound — her fourth goal of the season – just two minutes later. A reverse hit by Jedeloo made it 5-0; she was assisted by reigning PSAC Athlete of the Week freshman Valu Paul (Buenos Aires, Argentina/Instituto La Salle Florida). Less than two minutes before halftime, Petrantonio scored after receiving a pass from freshman Emilia Conners (Havertown, Pa./Haverford).

Twenty seconds into the fourth quarter, Petrantonio struck again off a rebound shot. Freshman Nya Gilchrist (Ocean City, N.J./Ocean City) scored her second goal of the season from a pass by senior Kalah Williams (Easton, Pa./Easton Area), and Petrantonio produced the final scoring margin off a rebound shot. Her four-goal effort marked her sixth hat trick of the season.

Frostburg State (1-14) goalkeeper Maggie Haupt made several great stops and finished with a career high 21 saves. On the back line, Olivia Wenzel made three defensive saves.