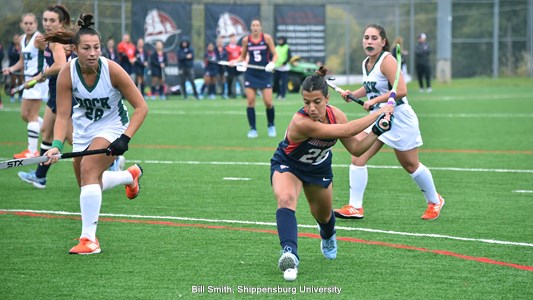 The undefeated Raiders field hockey team ruled over Slippery Rock in its last Pennsylvania State Athletic Conference (PSAC) matchup of the season Saturday with a 5-0 win over The Rock on a cloudy afternoon at Robb Sports Complex.

For the second straight game, Sluymer opened the scoring with a natural hat trick. It marked her fifth career hat trick and extended her single-season career high to 23 goals. Petrantonio assisted on the first Sluymer goal, and Albright assisted the next two.

Petrantonio extended her single-season school record for goals in the third quarter with her 34th of the year off an assist from Gruber. With three seconds left in the third quarter, Paul took an aerial pass from senior Maddie Reuther (West Chester, Pa./B. Reed Henderson), dribbled into space, and rocketed a shot high in the cage.

The undefeated Raiders concluded its regular season with Saturday’s win, marking the first time since 2013 that the team finished conference play without a loss. It’s the fifth time in school history that SU has completed the conference schedule undefeated, without a loss.

Shippensburg will host the 2021 PSAC Field Hockey Championships Friday, Nov. 5, and Sunday, Nov. 7, at Robb Sports Complex. The Raiders will play in the first semifinal at 1 p.m. Friday against an opponent to be determined.

More information about the tournament will be announced this week at the Raiders website.